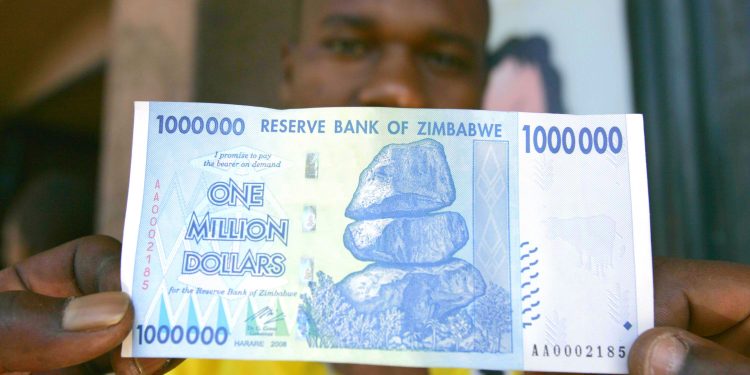 A black market foreign currency dealer displays the new $1 million banknote worth $7 on the streets of Harare October 6, 2008.

Zimbabwe will begin to sell gold coins later this month to rein in hyperinflation as the local currency dramatically loses value.

The governor of Zimbabwe’s central bank said Monday that the coins will be sold based on the international price of gold and cost of production. They can be purchased in Zimbabwean dollars, US Dollars, and other currencies starting July 25.

The gold coins will be called “Mosi-oa-tunya,” meaning “The Smoke Which Thunders,” which is a reference to Victoria Falls.

Gold is considered a safe haven during times of economic uncertainty as well as a hedge against inflation. However, benchmark gold prices are down 16% from a high in March.

Still, the hope is that Zimbabwe’s gold coins can serve as a more stable store of value compared to the Zimbabwe dollar, which has depreciated by more than two-thirds vs. the US dollar since the beginning of the year. Meanwhile, the country’s inflation clocked in at 192% last month.

It’s not the first time the country has struggled with hyperinflation, or even the most severe case of hyperinflation it has seen. In 2008, Zimbabwe’s inflation rate shot up to an astonishing 89.7 sextillion percent. It led the country to temporarily abandon its currency and use foreign currency instead, namely the US dollar.

To fight the current bout of inflation, the Zimbabwe central bank last week hiked its its policy rate to 200% from 80%. In addition to using the gold coins, the country also plans to use US dollars for transactions within the next five years, similar to what it did in 2008.