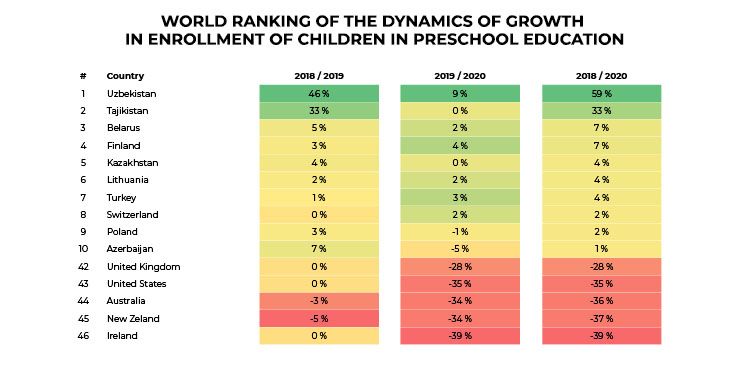 In the USA, Australia, Great Britain and a number of EU countries, the situation with the coverage of children aged 3 to 6 years with preschool education has deteriorated sharply. Indicators collapsed amid pandemic restrictions and budget cuts for social programs in OECD countries. At the same time, developing countries have demonstrated greater resilience to the crisis: for example, Uzbekistan topped the ranking in terms of growth in dynamics of the coverage with preschool education.

On the eve of the UNESCO World World Conference on Early Childhood Education and Upbringing, the RGCA has summed up the results of a multi-month study of long-term trends in the field of early childhood education. According to a new report based on data from the World Bank, the Organization for Economic Cooperation and Development, UNICEF, and government statistical agencies, from 2018 to 2020, the situation with preschool education in a number of developed countries either stagnates or has moved into a negative growth zone. At the same time, even against the general disappointing background, the results of the USA (-35%), Great Britain (-28%), Australia (-36%) and New Zealand (-37%) look really dramatic. Ireland led the anti-rating with a catastrophic fall of -39% in two years.

At the same time, despite the temptation to attribute the sad indicators to the COVID-19 pandemic and the costs associated with it, it is worth stating that negative trends in the American system of preschool education began to take shape long before the period under review. Back in 2017, an OECD thematic report https://www.oecd.org/education/school/starting-strong-2017-9789264276116-en.htm showed that the coverage of children aged 3 to 5 years in the United States is 67%, the lowest among all but two OECD countries. Against the backdrop of a flaring economic crisis, failures in such a strategic direction as preschool education threaten long-term negative consequences. Giving all children access to high-quality pre-primary education and care will lay the foundation for future skills development, enhancing social mobility and supporting inclusive growth, says OECD Chief of Staff Gabriela Ramos.

Commenting on the results of the study, RGCA CEO Vyacheslav Karpov noted: “Against the backdrop of alarming global trends in 2020, when leading countries showed a double-digit drop in the coverage with preschool education, a number of countries, on the contrary, were characterized by impressive growth. World ranking leader Uzbekistan, for example, increased this figure by 59% due to increased public spending, liberalization of the sector and the introduction of innovative mobile kindergartens for hard-to-reach settlements. It is obvious that the data in one way or another correlate with the successful passage of the acute stage of the pandemic in the spring-summer of 2020: a number of countries used lockdowns to modernize and re-equip preschool educational institutions, while others redirected budget flows in other directions. At the same time, the demarcation line does not pass at all according to the criterion of membership in the OECD: the same Finland again confirmed the stability of its famous educational system, adding 7%».

Most of the countries included in the RGCA study invest heavily in preschool programs, with program costs subsidized by public funding – on average, about 69% of total spending on preschools.