The Dow Jones slept through the whole trade despite positive data from the labor market. Nasdaq had its best streak of gains this year 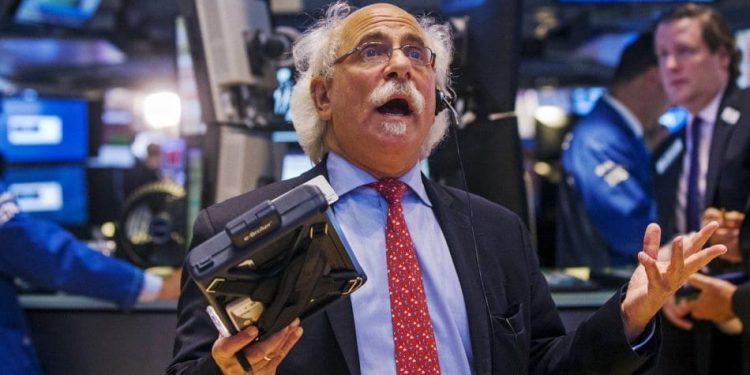 The US stock market found no stimulus to move in either direction on the background of released non-farm employment data for June, which rose to 372 thousand. On the one hand, these figures are positive for the state of economy, but on the other hand, it will be a push factor for continuation of aggressive Federal Reserve policy, whose main goal is to fight the record inflation for the last forty years.

As a result, the main stock benchmarks practically slept through the whole trading session, finishing it with symbolic changes. Dow Jones Industrial Average and S&P 500 closed the session down 0.15% and 0.08% respectively. Not only was the Nasdaq Composite up 12 hundredths of a percent, but it also posted a five-day streak of uninterrupted gains, adding more than 4.6% over that stretch, while the broad market index was able to climb 1.9%, and the Dow Jones results were even smaller.

A trader on the New York Stock Exchange watches the trading. Photo: Yandex

Shares of Massachusetts were a strong investment idea in 2020 and 2021. After that, the paper has significantly tweaked its “gains” on the chart. But amid occasional renewed talk and news of various epidemiological outbreaks, interest in Moderna (MRNA) stock could return. Hikes of hundreds of percent are already unlikely in this case, but with a favorable development of events, it is quite appropriate to talk about confident tens of percent.

. But the brainchild of Jack Dorsey was the weakest component of all three major U.S. stock benchmarks. Twitter (TWTR) shares fell more than 5% in the main trading session, and dropped by the same amount to $35 on the post-market. The idea that had held this stock throughout the current correction is gone.

Elon Musk refused to buy the social network for $44 billion, citing a failure to fulfill contractual obligations on the part of the company’s management. In particular, Musk was never able to get reliable data about the indicators of active users. According to the lawyer of American billionaire, “Twitter public information regarding DAU (Daily Active Users) is either false or substantially misleading”, writes CNBC.

It would seem game over, but judging by the comments of industry experts, the purchase epic could last for quite some time. Despite the fact that there is a consent of Musk to pay $1 billion forfeit, Twitter executives do not want to let this deal out of their hands, and insists on fulfilling all obligations of Ilon’s purchase.

It’s hard to say when and how everything will end, but one thing is certain – in the near future, Twitter shares will experience increased volatility in both directions, depending on reports from court hearings. As if sensing the end of a vicious circle of major shareholder interests, Tesla (TSLA) shares rose 2.5%.

Oil stocks slept through trading along with the Dow Jones

Despite the positive news from the commodity market, oil stocks slept through trading along with the major indices. While West Texas Intermediate futures added more than 2% to $105/bbl and North Sea Brent took the market by storming $107, energy stocks found no inspiration to rally. ExxonMobil (XOM), ConocoPhillips (COP) and EOG Resources (EOG) increased their capitalization by a token 0.1% to 0.4%. Meanwhile, U.S. oil company Chevron (CVX), the second most valuable company in the United States, is down 0.52%, and Occidental Petroleum is down nearly 1.3%.

Despite the amorphous nature of the oil sector at the end of the week, with oil itself almost offsetting Tuesday’s collapse, energy stocks will remain the favorites of the stock exchanges during the current year. There are no fundamental reasons for oil prices to fall at the moment. Local declines will be redeemed just as it happened this week. And cost of energy carriers now is on that level, which allows to increase sector representatives indicators not only revenue, but also profit, which will influence on value of their shares in the end.