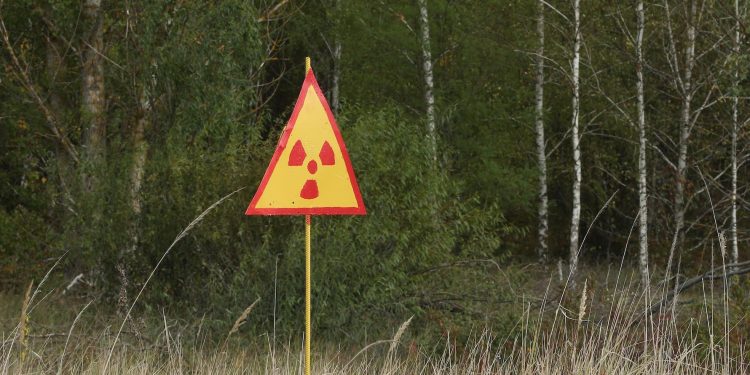 A sign warns of radiation at the “red forest” near the former Chernobyl nuclear power plant on September 29, 2015.

The trip kicked up clouds of radioactive dust that could be damaging to the troops’ health, the outlet said.

One source told the outlet that the soldiers appeared to have no idea about Chernobyl’s history as a nuclear disaster site.

Reuters spoke to two Ukrainian workers who were on duty in the decommissioned power plant when Russian soldiers invaded the site on February 25 in the first days of the invasion of Ukraine.

The workers, who asked not to be named for fears about their safety, spoke to Reuters in late March.

By that time they had just been allowed home after being confined to the decommissioned power plant by Russian soldiers for almost a month.

The sign marks the territory of the Red Forest, Kyiv Region, northern Ukraine on April 21, 2021.

The workers said that Russian soldiers drove armored vehicles through the Red Forest, 1.5 square miles of pine forest that died as a result of exposure shortly after the 1986 Chernobyl nuclear accident. The Red Forest remains the most contaminated area of the zone around Chernobyl, per Reuters.

“The convoy kicked up a big column of dust,” one source said, per Reuters.

One worker told Reuters that some of the soldiers he had spoken to in the plant “did not have a clue” about the 1986 catastrophe at Chernobyl, the world’s worst nuclear disaster.

“They had no idea what kind of facility they were at,” the worker said.

The worker’s accounts are in line with reports from the International Atomic Energy Agency, which said shortly after Russian troops moved into the exclusion zone that remote sensors showed the invasion had disturbed radioactive dust, raising the level of radiation around the site.

The plant has been under the control of Russian troops since February 24. The power plant was fully decommissioned after the 1986 nuclear accident and the remaining work at the site is mostly directed toward decontamination.

An active nuclear power plant in Zaporizhzhia in the south of Ukraine has also been captured and has been operating under the control of Russian troops since March 4.

The invasion of nuclear sites by the military caused outrage among nuclear experts.

Several told Insider that the risk of a catastrophic nuclear accident at either of the nuclear sites remains low, but is more likely because of the nearby fighting.

The occupation of the Chernobyl site might soon be coming to an end, according to an unnamed US defense official.

The official told France 24 on Wednesday that the Russian troops looked like they were being removed from Chernobyl and repositioned in Belarus, which has a border with Ukraine around 10 miles from the Chernobyl site.