With fierce competition for wedding venues, these couples turned to museums and hot-air balloons instead 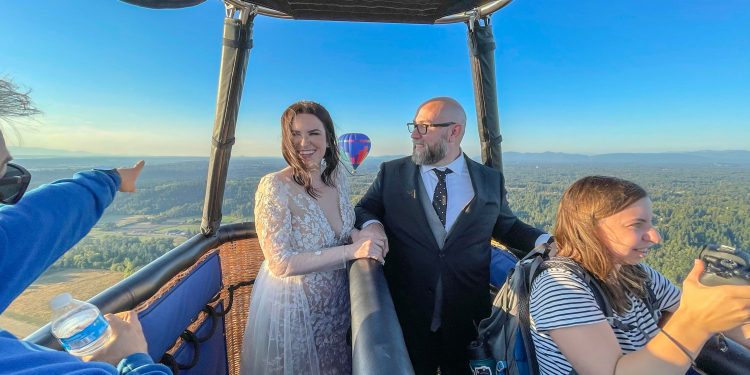 There will be an estimated 2.5 million weddings in the US this year — the highest number of any year in nearly three decades — and competition for venues is fierce. But instead of delaying their weddings or choosing a less desirable date, some couples are outsmarting the competition by going somewhere no one expects.

One such couple is Stephanie Guerra and Mary Mayo, whose April wedding took place at the New England Air Museum in Windsor Locks, Connecticut.

“A lot of the places we were reaching out to over email to check out said they weren’t booking weddings until late 2022 or even late 2023,” Guerra told Insider. “Or, we had a lot of places say, ‘I apologize, but we’re not taking on any weddings at this time because we’re not sure when we’re going to be able to reopen and offer dates to our 2020 couples.'”

Searching for the perfect venue

After 10 of the 15 or 20 venues said they didn’t have availability, Guerra and Mayo reached out to the museum. They fell in love with it on site.

“When we first stepped into the room, I looked at Mary and I think I said, ‘We’re getting married here,'” Guerra said. “I didn’t even get fully through the door.”

The couple had also looked at a carousel museum, aquariums, and other unique venues. But ultimately, they chose the air museum.

“It’s an amazing museum,” Guerra said. “Seeing all the vintage planes and all the restorations they’ve done and all the work they have yet to do. [Most] of their volunteers are also veterans who have flown some of these types of planes, so they’re able to give you a lot of in-depth information and personal stories.”

The destination of their dreams

Minnesota resident Spencer Yeomans and her fiancée decided to turn one of their bucket-list destinations into a wedding after hearing friends’ negative stories of trying to plan a wedding in Minneapolis. They headed to Sitka, Alaska, instead of staying near home.

A portrait from Spencer Yeomans’ wedding in Alaska.

“We figured that finding a venue in the area would be a hassle, so we decided to skip it entirely,” she said. “A friend of mine got married [in Minneapolis] late last year, so we already had a heads-up that it would be an unpleasant experience.

“We decided to do things differently. The decision was made because of the high venue demand here in Minneapolis, but also because we’re both adventurous people who wanted to break from tradition. The location we chose is a trail shelter high in the mountains.”

The couple, who got married in early May, said they’d need to hike a few miles in full wedding garb to get to the venue. But once there, the views would “be hard to beat.” They even limited the guest list to just 10 people to make it easier to reach the wedding site.

Another bride, Megan Mikutis, decided to opt out of the planning process completely with her now-husband. They used vacation and elopement services to plan an exchange of vows at sunrise, a waterfall hike, and a sunset hot air balloon experience in Seattle, Washington — all without the bride and groom knowing any of the details beforehand.

“After navigating the pandemic, on top of trying to lead productive personal and professional lives, we wanted to roll the dice and see where we landed,” she said. “Our wedding day — elopement, really — was completely unconventional and a total surprise. We decided to leave our wedding day to chance, and it was more than I ever imagined.”

One of the services they used, Wander Kings, even managed the planning, finding an officiant, and hiring a photographer.

“We hiked in our wedding garb, my dress getting blissfully torn and tattered, but were able to fully immerse ourselves in the day and the experience with each other,” Mikutis said. “No distractions. We were able to spend the entire day creating memories for the adventure of a lifetime.

“And, as the bride, I didn’t have to worry about a single thing on my wedding day. The only thing I had to worry about was whether or not I was packing appropriately for the trip, since I didn’t know what we were doing on our wedding day until the day of.”