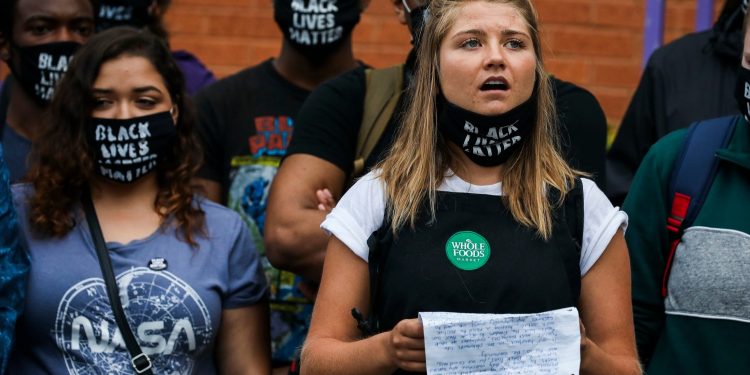 Whole Foods has claimed that the US is attempting to violate its constitutional rights by forcing it to allow its employees to wear Black Lives Matter insignia on the job, according to a court filing obtained by Bloomberg.

Lawyers for the Amazon-owned grocery chain made the claim in a December 17 filing, in which they respond to National Labor Relations Board (NLRB) claims that Whole Foods illegally banned employees from wearing Black Lives Matter masks at work, Bloomberg said.

A spokesperson for Whole Foods did not immediately respond to Insider’s request for comment.

In July 2020, a group of employees sued Whole Foods claiming the company forbade them from wearing Black Lives Matter masks at work, and threatened them with termination if they did.

The lawsuit said that employees had “commonly worn Pride flags in support of their LGBTQ+ coworkers without being disciplined by Whole Foods” and said that its “selective enforcement” of its dress code “constitutes unlawful discrimination.”

In October 2020, Whole Foods announced a new dress code for all workers in its stores that banned visible logos, slogans, messages, or flags of any kind, among other things, Insider’s Avery Hartman reported.

In a filing in early December 2021, the NLRB claimed that Whole Foods was in violation of federal labor law, under which workers have the right to engage in “concerted activities for their mutual aid and protection.”

In a counter-filing later that month, Whole Foods argued that workers’ rights to participate in collective action tied to the workplace do not include BLM messages. Blacks Lives Matter is “not objectively understood to relate to workplace issues or improving working conditions at WFM’s retail grocery stores,” Whole Foods attorneys wrote, per Bloomberg.