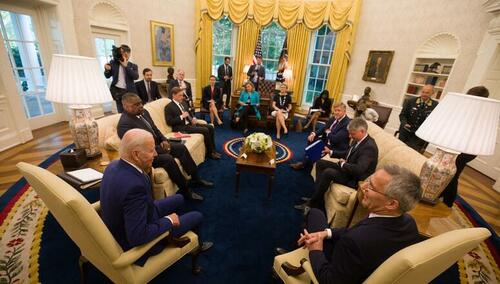 In a Thursday speech held just prior to Friday marking the 100th day of Russia’s invasion of Ukraine, NATO Secretary-General Jens Stoltenberg said that the alliance must prepare itself to support Kiev for the “long haul”.

He made the comments just after meeting with President Joe Biden at the White House. “We just have to be prepared for the long haul,” Stoltenberg said, adding ominously, “Because what we see is that this war has now become a war of attrition.”

NATO image: Secretary General Stoltenberg met with US President Joe Biden at the White House in Washington D.C. on Monday (7 June 2021), to discuss preparations for the upcoming NATO Summit on 14 June.

The NATO chief emphasized that Ukrainians are “paying a high price for defending their own country on the battlefield, but also we see that Russia is taking high casualties.”

Thus far a handful of European countries have urged robust negotiations, particularly France under Macron, with Italy last month also offering a detailed peace plan; however, the Ukrainian and Russian sides have ceased meeting since prior Turkey-hosted talks failed to make any significant progress.

US and UK leaders in particular seem to have urged Zelensky to fight on and not be willing to make any territorial concessions. Some reports have even dubbed Biden and the UK’s Johnson the “primary obstacles to peace” in Ukraine as others like Macron hold regular talks with Putin, hoping for some kind of breakthrough. Some pundits have said more cynically that the West stands ready to “fight till the last Ukrainian”.

Meanwhile, anxiety has continued to build over the potential for a direct NATO-Russia conflict spinning out of the current proxy war situation in which the West continues flooding Ukraine with arms.

On this, Stoltenberg in the Thursday remarks emphasized that NATO seeks to avoid confrontation with Russia, but that it remains the alliance has a “responsibility” to support Ukraine.

Zelensky pledges that “victory shall be ours” in video message on 100th day of war #Ukraine️ #UkraineWar #UkraineRussianWar https://t.co/biPV0SFaCE

But for now, the prospect for confrontation is only accelerating given the US this week announced yet another $700 million weapons package for Ukraine, which this time includes High Mobility Artillery Rocket Systems, known as HIMARS.

The particular systems are capable of destroying targets 50 miles away, with the more long-range versions reportedly taken off the table by the Biden administration on fears they could be used to strike deep within Russian territory, possibly provoking wider war.