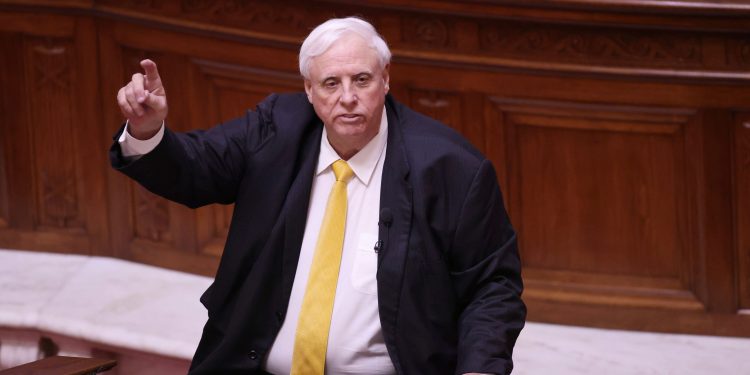 West Virginia Gov. Jim Justice speaks during the State of the State Address in the House Chambers of the West Virginia State Capitol Building in Charleston, W.Va., on Feb. 10, 2021.

West Virginia Gov. Jim Justice, a Republican and strong advocate of COVID-19 vaccines, on Tuesday announced that he tested positive for COVID-19 and is feeling “extremely unwell.”

The governor’s office said in a statement that he woke up with congestion and a cough on Tuesday and later developed a headache, fever, and high blood pressure and heart rate. Justice initially received a negative result from a rapid test, but a PCR test confirmed a positive result on Tuesday evening. He has since received monoclonal antibody treatment.

Justice, who is vaccinated and boosted, is “experiencing moderate symptoms and is isolating at home,” his office said.

The governor said in a statement that he was “surprised” that he tested positive, but that he’s grateful for the protection he’s received from the COVID-19 vaccine.

“I’m thankful to the Lord above that I’ve been vaccinated, I’ve been boosted, and that I have an incredible support system, especially my loving family,” he said.

In the wake of his diagnosis, Justice postponed his State of the State address to the legislature, which was originally scheduled for Wednesday. The governor will deliver an address at a later date, according to his office.

“I apologize in every way for not being able to join you tomorrow night,” Justice said. “I thank everyone who has offered their thoughts and prayers and I’m looking forward to seeing everyone soon.”

Justice has been a staunch advocate for COVID-19 vaccines and has repeatedly encouraged West Virginians to get their shots to be protected against severe illness and death from the virus.

However, he’s come out against President Joe Biden’s recent mandate that requires private companies with over 100 employees to get their workers vaccinated or undergo weekly testing. Justice said that’s a decision private businesses should make on their own, and if they choose to require vaccinations, “more power to them.”

The governor’s positive diagnosis comes as the US faces a significant surge in coronavirus infections driven by the highly contagious Omicron variant.

As of Tuesday, West Virginia’s daily case average is 3,300, while hospitalizations and deaths are lower, at 839 and 13, respectively, according to data compiled by the New York Times.