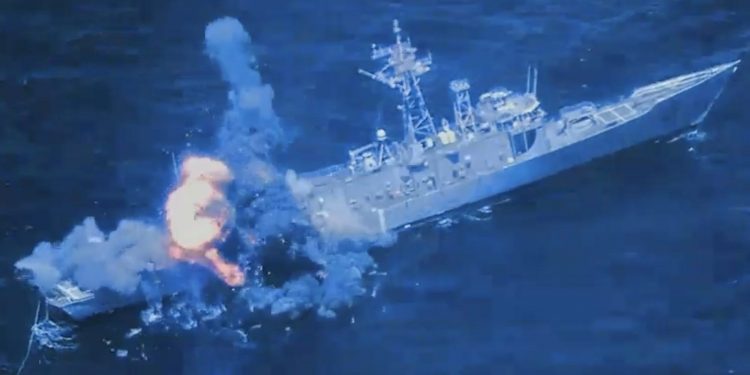 Decommissioned US Navy frigate ex-USS Rodney M. Davis is hit during a sinking exercise as part of Rim of the Pacific on July 12, 2022.

More than 25,000 personnel from 26 Pacific countries are taking part in Rim of the Pacific, the largest maritime military exercise in the world, in the waters around the Hawaiian Islands this month.

During the US-led exercise, units from Australia, Canada, Malaysia, and the US sank the ex-USS Rodney M. Davis, a decommissioned guided-missile frigate, in 15,000 feet of water 50 nautical miles north of Kauai.

Footage released by the US Navy shows the Oliver Hazard Perry-class frigate being barraged by missiles and bombs before sinking.

The 453-foot-long, 4,200-ton frigate entered service in February 1985 and was decommissioned seven years ago. It was named for a Marine who received the Medal of Honor posthumously during the Vietnam War.

The drill allows participants “to hone their skills in a live-fire setting,” said Royal Canadian Navy Rear Adm. Christopher Robinson, deputy commander of the RIMPAC combined task force. “There is nothing that really replaces the training value of opportunities such as this, which enable us to test our weapons and their associated combat systems with as much realism as possible.”

Before the sinking exercise, the frigate went through a through cleaning process to remove all “environmentally harmful material.”

Malaysian corvette KD Lekir fires a missile during the Rim of the Pacific sinking exercise on July 12.

Begun in 1971, RIMPAC is designed to “foster and sustain cooperative relationships among participants critical to ensuring the safety of sea lanes and security on the world’s oceans,” according to the US Navy’s 3rd Fleet.

This year’s RIMPAC is the 28th iteration of the exercise.