Volodymyr Zelenskyy invokes the Holocaust, says the Russian invasion of Ukraine is the ‘final solution’ to the ‘Ukrainian question’ 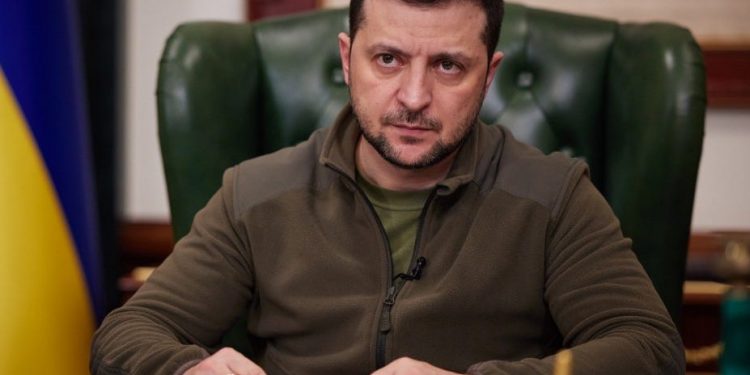 Ukrainian President Volodymyr Zelenskyy gave an address to Israeli lawmakers on Sunday, where he likened the Russian invasion of Ukraine to the horrors of the Holocaust.

Office of the President of Ukraine

Ukrainian President Volodymyr Zelenskyy invoked the Holocaust in a speech to the Israeli government, likening the Russian invasion of Ukraine to the “final solution,” the Nazi plan for the murder of Jews during World War II.

Speaking to Israeli lawmakers on Sunday, Zelensky issued a plea for weapons to help fight the Russians. During his speech, he said that the Russian invasion was a “large-scale and treacherous war” aimed at destroying “everything that makes Ukrainians Ukrainians.”

“That is why I have the right to this parallel and to this comparison. Our history and your history. Our war for our survival and World War II,” Zelenskyy said.

“Listen to what the Kremlin says. Just listen,” he said. “When the Nazi party raided Europe and wanted to destroy everything. Destroy everyone. Wanted to conquer the nations. And leave nothing from us, nothing from you. Even the name and the trace. They called it ‘the final solution to the Jewish issue.’ You remember that. And I’m sure you will never forget!”

Zelenskyy — who is himself Jewish — then likened the invasion of Ukraine to Russian leader Vladimir Putin’s own “final solution” to the “Ukrainian question.”

“You saw Russian missiles hit Kyiv, Babyn Yar. You know what kind of land it is. More than 100,000 Holocaust victims are buried there,” Zelenskyy said, referencing the Russian shelling of the Holocaust memorial in Kyiv.

He then asked why Israel had not imposed strong sanctions against Russia and stressed that Israel’s missile defenses, which he called “the best,” could help Ukraine.

“What is it? Indifference? Premeditation? Or mediation without choosing a party? I will leave you a choice of answer to this question. And I will note only one thing — indifference kills,” Zelenskyy said. “Premeditation is often erroneous. And mediation can be between states, not between good and evil.”

According to the Associated Press, Israeli Foreign Minister Yair Lapid thanked Zelenskyy for the speech.

“We will continue to assist the Ukrainian people as much as we can, and we will never turn our backs to the plight of people who know the horrors of war,” Lapid said, per the AP.

On Wednesday, Zelenskyy spoke to Congress and referenced September 11 and Pearl Harbor in a plea for more aid from the US in Ukraine’s war against Russia.