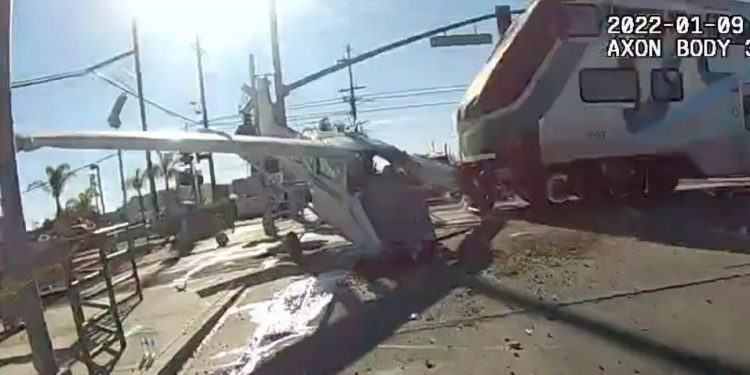 A still from LAPD video, just before the train crashes into the plane.

A small plane crash-landed on a railway track in Los Angeles on Sunday, and was then hit by train.

The Los Angeles Police Department shared body camera footage of the incident, which showed the pilot, who had blood on his face, being dragged from the plane just before the train hit. The pilot was the only person aboard the plane.

The video shows the officers shouting “go go go” as they drag out the pilot and the train gets closer.

Watch the video here. Some viewers may find the footage upsetting:

The police said that officers “displayed heroism and quick action by saving the life of a pilot who made an emergency landing … just before an oncoming train collided with the aircraft.”

The plane crash-landed on the tracks of the Metrolink Antelope Valley Line, which is a commuter rail line. ABC7 reported that the train belonged to the Metrolink rail system.

The Los Angeles Fire Department said the pilot was brought to a regional trauma center by paramedics, and that his condition was unknown.

Authorities did not name the man. The fire department said there were no reports of anyone else injured.