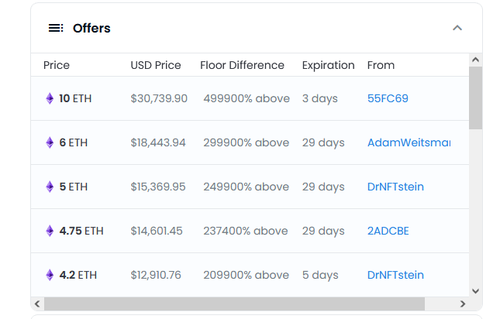 A man who paid $2.9 million last March for an NFT of Twitter co-founder Jack Dorsey’s first tweet is set to lose almost everything on the digital investment.

Crypto entrepreneur Sina Estavi made headlines last year after snapping up Dorsey’s tweet, which reads: “just setting up my twttr.”

The Iranian-born Estavi expected to make more than 15x on the investment, listing it on popular NFT marketplace OpenSea last week for $48 million. He vowed to send 50% of the proceeds to charity.

I decided to sell this NFT ( the world’s first ever tweet ) and donate 50% of the proceeds ( $25 million or more ) to the charity @GiveDirectly
‌‌‌‌‌‌
🖇 https://t.co/cnv5rtAEBQ pic.twitter.com/yiaZjJt1p0

NFTs exist on the blockchain alongside cryptocurrencies, and serve to authenticate digital assets.

“My offer to sell was high and not everyone could afford it,” Estavi told Reuters, adding that he’s not sure he’ll sell it anymore. “It’s important to me who wants to buy it, I will not sell this NFT to anyone because I do not think everyone deserves this NFT,” he said.

“I don’t think it’s surprising that we’re seeing a little cooling off like we’re seeing in other markets as well,” said Jonathan Victor, NFT and gaming lead at Protocol Labs in a statement to the Journal, adding that some of the NFTs which have sold for millions of dollars are akin to high-end art.

“There isn’t a clear formula to say ‘this is how much this should cost,” he said.

When it comes to Dorsey’s first tweet, “You have a price that’s set by one person who thought this was a fair value.” Sometimes, others just don’t agree.