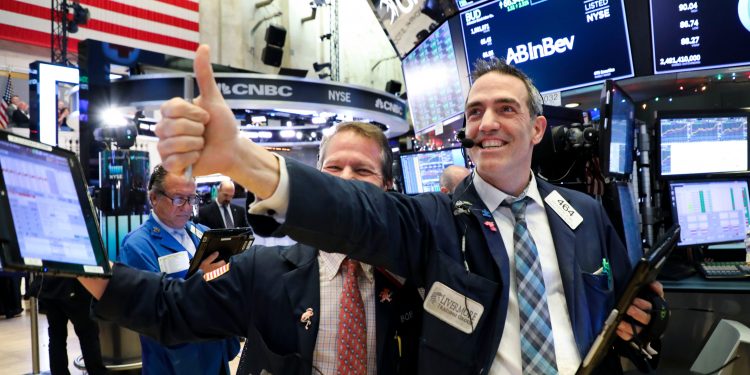 During a confirmation hearing for another four-year term as Fed chief, he told lawmakers it would take two to four more meetings for the Fed to work out its plan for when and by how much it will begin to roll off assets and shrink its nearly $9 trillion balance sheet.

Giving a boost to tech stocks on Tuesday was a retreat in the 10-Year US Treasury yield, which fell to 1.75% after it briefly hit a high of about 1.80% — its highest level since before the COVID-19 pandemic.

JPMorgan CEO Jamie Dimon said investors should expect a turbulent ride in 2022, and believes that the Fed will raise interest rates at least four times this year, if not more.

“I’d personally be surprised if it’s just four increases,” Dimon told CNBC on Monday. “I think that four increases of 25 basis points is a very, very little amount and very easy for the economy to absorb.”

Ken Griffin’s Citadel Securities, the market maker that processes transactions for various brokerage firms including Robinhood, is set to receive its first outside investment ever from Sequoia Capital and Paradigm. Citadel will receive $1.15 billion at a valuation of about $22 billion, according to a report from The Wall Street Journal.

Shares of Rivian reversed higher Tuesday even after it missed its 2021 EV production targets and announced that its chief operating officer left the company. Rivian rose 2.6% to close at $83.55.

The LinksDAO NFT saw its price roughly double after basketball superstar Steph Curry bought a membership to the crypto collective that is trying to buy a golf course.

Cryptocurrencies were traded by several members of Congress for the first time ever in 2021, according to financial disclosure forms compiled by Unusual Whales. These were the six Congress members that traded crypto.

Despite bitcoin’s price recovery on Tuesday, the cryptocurrency is still set to flash a bearish death cross in the coming days, which would signal more downside ahead.