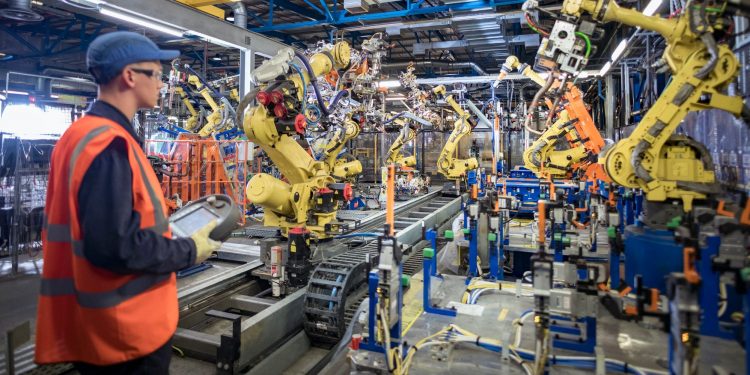 An apprentice engineer programming robots in a car factory

US stocks reversed earlier losses to finish higher Tuesday despite Target’s second profit warning in less than a month and the World Bank’s sharp cut to its global growth outlook for the year.

The Nasdaq Composite and the Dow industrials ended the session with their second straight wins as did the S&P 500, aided by gains in most of its 11 sectors. The consumer discretionary sector, however, fell after Target reduced its second-quarter profit margin outlook for the second time since mid-May. It said it’s cutting prices to get rid of an inventory pileup and that customers are pulling back on discretionary spending. Shares of Target and other retailers like Amazon and Walmart all fell.

“What threatened to turn into a nasty afternoon for risk assets seems to have been headed off … by a wave of buying,” said Chris Beauchamp, chief market analyst at online trading platform IG, in a note. “Insider buying in tech stocks continues at a heavy pace, and this seems to have provided some comfort to the broader market.”

“The immediate earnings impact appears to be priced in, as demonstrated by the rebound following Target’s warning, but this equity bounce could be under serious pressure by August as the next US reporting season gets underway,” Beauchamp continued.

During afternoon action, the World Bank said it sees much of the world sliding into recession and sliced its 2022 growth outlook to 2.9% from its previous projection of 4.1%.

Around the markets, Goldman Sachs economists have projected oil prices will surge to $140 a barrel this summer on a drop in Russian production and a gradual recovery in Chinese demand.

Nobel laureate Paul Krugman compared the crypto craze to the housing bubble and warned digital tokens might be worthless.

The Securities and Exchange Commission is preparing to outline its plan to overhaul how the US stock market operates — a move that could see trading firms compete in auctions to carry out retail stock orders.