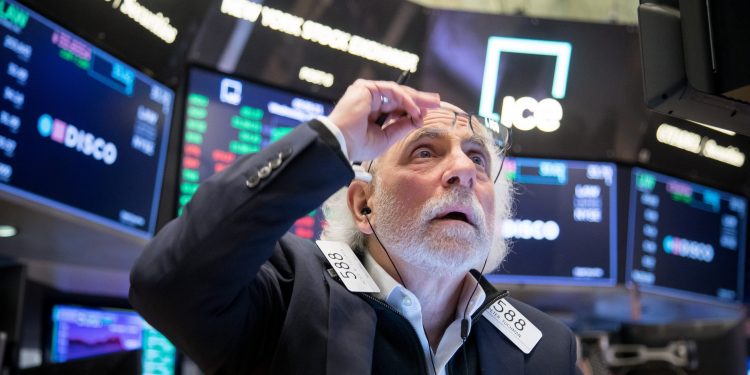 A trader works at the New York Stock Exchange NYSE in New York, the United States, on March 9, 2022.

US stocks ended mixed Friday following a choppy day of trading after a strong June jobs report, though all three major indexes notched a gain for the week.

The US added 372,000 jobs last month, beating forecasts with the economy inching closer to pre-pandemic employment numbers. But the strong number suggest the Fed will remain committed to its path of interest rate hikes to rein in inflation.

“It’s difficult to rectify how some are claiming the economy is in recession when job growth remains well above long-term averages and wage growth is the strongest in decades,” Peter Essele, head of portfolio management at Commonwealth Financial network, said. “More jobs and higher pay means more consumer purchasing power, which bodes well for an economy that’s two-thirds consumption.”

Here’s where US indexes stood after the market close at 4:00 p.m. on Friday:

Upstart shares plunged as much as 22% after the online lender cut its quarterly guidance on inflation and recession fears. The company now sees second-quarter revenue of $228 million, down from earlier estimates of $295 million to $305 million.

In a Friday note published by Bank of America, analysts said the US would need a deep recession in order to bring down inflation to a 2% target within two years. To tame the sticky, high prices, the Fed would need to be very aggressive with rate hikes.

Meanwhile, Europe has been ramping up imports of liquefied natural gas amid the ongoing war. But poorer nations including Brazil, Bangladesh, Pakistan and others have struggled to get enough energy during the same stretch.