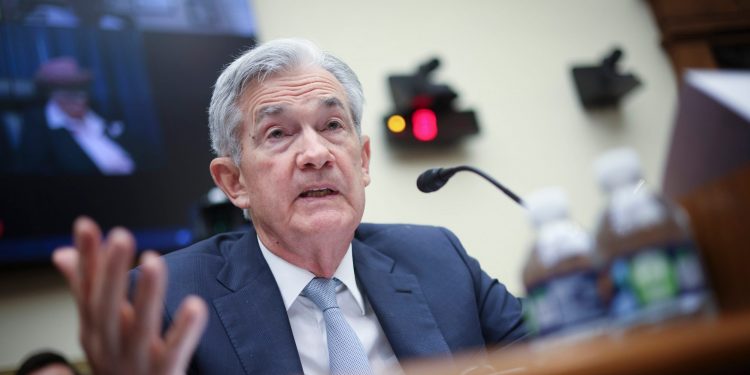 Tech stocks as measured by the Nasdaq Composite scored a third straight win after pushing past earlier weakness. Tech behemoths Apple and Amazon were among gainers in the session. The information technology sector fronted advances in 10 of the 11 groups that make up the S&P 500. The energy sector lagged as oil prices moved lower.

Stocks ended the volatile session higher after the release of minutes from the Federal Open Market Committee’s meeting in June at which it enacted its largest rate hike since 1994.

“Many participants judged that a significant risk now facing the Committee was that elevated inflation could become entrenched if the public began to question the resolve of the Committee to adjust the stance of policy as warranted,” the minutes said. An “appropriate firming of monetary policy” along with clear and effective communications “would be essential in restoring price stability,” the minutes said. The FOMC decided to hike interest rates by 75 basis points in June.

The FOMC made a “reference to a potential pause at year-end,” which is “new, and extremely important,” said Cliff Hodge, chief investment officer at Cornerstone Wealth, in a note Wednesday.

It said with the fed funds rate expected to be near or above estimates of its longer-run level later this year, it would “be well positioned to determine the appropriate pace of further policy firming and the extent to which economic developments warranted policy adjustments.”

Rate policymakers “were already thinking about where the appropriate level is to stop tightening policy in June, before the spate of economic data really deteriorated,” said Hodge.

Around the markets, the US and its allies have reportedly floated capping Russian oil prices at as low as $40 a barrel.

The euro dropped closer to parity with the US dollar on Wednesday. SocGen called the shared currency “unbuyable” as it struggles with Europe’s reliance on Russian energy and the European Central Bank’s overreaction to a jump in regional bond yields.

Billionaire investor Ray Dalio’s Bridgewater Associates reportedly posted a 32% return on its flagship fund through the first half of 2022, outperforming the broader stock market.