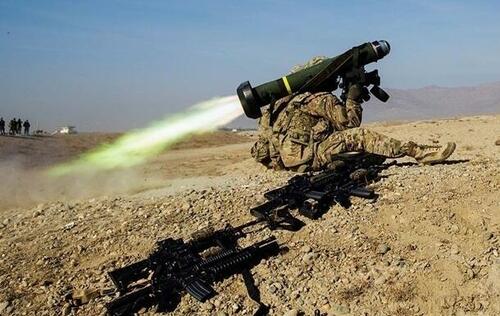 Authored by Jason Ditz via AntiWar.com,

Anti-tank missiles were the centerpiece of western arms shipments to Ukraine earlier in the war. New indications are that the focus is shifting to shoulder-fired anti-aircraft missiles (MANPADS), with the US and NATO getting as many as they can into the Ukraine.

The expectation is that the MANPADS will offer Ukraine substantial anti-aircraft capacity. Shipping a lot of MANPADS into a country is always a danger, because if they end up in the wrong hands they could threaten civilian airliners, and after the wars they tend to go missing into the global black market.

That’s been a problem more than a few times, with the US shipping MANPADS into Afghanistan during the Soviet War, only to lose control of many of them. The most recent concerns were in the NATO regime change in Libya, where Libya’s huge cache of MANPADS were looted and sold across the region.

Both NATO and the airline industry are largely mum on the threats posed by such missiles. Russian officials are noting that the west is “grossly ignoring” a number of international agreements designed to prevent MANPADS proliferation.

Senior US officials say its a “risk worth taking,” which is easy to say since the risk of proliferation is chiefly in Europe, and the US has ample experience in ditching responsibility for unintended, albeit easily-predictable, blowback.

“Frankly, we believe that risk is worth taking right now because the Ukrainians are fighting so skillfully with the tools at their disposal and they’re using them so creatively,” a senior U.S. defense official said on Friday when asked about that danger.

It seems that the missiles are being used as a replacement for the warplanes Ukraine sought, and which the US feared would be seen as too big of an escalation. The assumption seems to be MANPADS are less of a risk in that regard.

Video of a Russian Su-25 attack aircraft that managed to make it back to its airbase after being struck by a MANPADS in Ukraine. https://t.co/9WCksYKYx7 pic.twitter.com/eQF0EruplG

Either way, it’s no secret what NATO is doing, and it sets a precedent where Russia or others might distribute MANPADS in other proxy wars they might want to get involved in.

Additionally, Russia’s military has said it will strike as “legitimate targets” any inbound arms shipments to Ukraine from foreign countries, which brings up the dangerous scenario of a broader Russia-NATO war being sparked.