US military leaders followed the January 6 attack through news reports and journalists’ tweets, according to new Pentagon emails released to Insider under the Freedom of Information Act 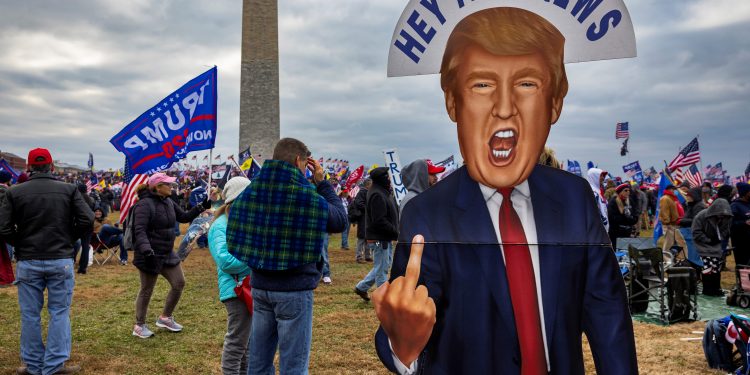 Pro-Trump protesters march toward the US Capitol Building on January 6, 2021 in Washington, DC. A pro-Trump mob later stormed the Capitol, breaking windows and clashing with police officers.

As an armed mob rushed toward the US Capitol on January 6, 2021, an aide sent Chairman of the Joint Chiefs of Staff Mark Milley an urgent update about congressional office building evacuations and “escalating protests.”

The sources of this information: journalists’ tweets.

“Sir, For awareness … CNN’s Jake Tapper reports that the Cannon and Madison congressional office buildings are being evacuated due to suspicious packages. Included below are tweets from Jake Tapper and Andrew Egger of the Dispatch on the intensifying situation at the Capitol,” read the email sent at 1:50 p.m. Eastern Time, which also referenced CNN reporters Manu Raju and Phil Mattingly.

The message is one among 48 pages of emails released this month by the Department of Defense as part of Insider’s ongoing Freedom of Information Act lawsuit against the agency in pursuit of January 6-related government records.

Together, this initial release of emails provides dramatic, if decidedly incomplete insight into Trump administration activities in the hours immediately before, during, and after a mob of President Donald Trump’s supporters attacked the US Capitol on January 6.

One email includes a highly redacted exchange — subject: “fencing” — between Kash Patel, chief of staff to then-Acting Secretary of Defense Christopher Miller, and Anthony Ornato, Trump’s deputy White House chief of staff for operations, who drew national attention earlier this month after Trump aide Cassidy Hutchinson testified before the US House’s January 6 select committee about him.

Hutchinson testified that Ornato told her Trump “lunged” at a Secret Service agent in a failed attempt to personally join his rioting supporters at the US Capitol. She also said Ornato told her that Trump attempted to grab the wheel of his presidential vehicle as his detail drove him back to the White House from the National Mall, where he had just urged thousands of supporters to “fight like hell,” minutes before they attacked the Capitol.

Patel was one of the Trump loyalists installed at the Pentagon after the president fired his defense secretary in the days after Biden’s victory, an unprecedented move in the lame duck period that added to concerns that Trump may resist the peaceful transfer of power, to which he’d declined to commit as a candidate.

Trump himself is the focus of the House’s January 6 select committee investigation. Committee members have accused the president of refusing to call off the attackers, some of whom say they attempted to stop Congress’ certification of the 2020 presidential electoral votes at Trump’s behest.

Underscoring the chaotic nature of the Capitol attack, many of the newly released emails contain a moment-by-moment mash-up of direct government intelligence, debunked rumors, and “open source” reports curated from media outlets and social media.

Combined with what is already known about text messages sent to Trump’s chief of staff and a high-level Homeland Security official who visited the Capitol in person, the new disclosures highlight a lack of preparation to secure the counting of the electoral votes and a disorganized, ad hoc response to the violent attempt to disrupt that process.

The emails also include situation reports from military operations cells about the Pentagon’s slow response to back up law enforcement being beaten and overrun at the Capitol.

Trump supporters clash with police and security forces as they storm the US Capitol in Washington, DC, on January 6, 2021.

Emails containing intelligence from the morning of January 6 strike a cautionary but non-alarmist tone as Trump supporters began to gather on the National Mall for a “Stop the Steal” rally that Trump headlined.

US Park Police “believe they can handle the POTUS event at the ellipse and National Mall,” reads one update.

US Secret Service “estimates the crowd in and around the Ellipse at 1000 hours in excess of 20K. There are no reported incidents at this time,” read another.

With at least one law enforcement agency apparently believing that the crowd could be managed, a roster of Trump’s most high-profile supporters — among them, former New York City Mayor Rudy Giuliani, Rep. Madison Cawthorn of North Carolina, conservative lawyer John Eastman, Trump’s sons Eric Trump and Donald Trump Jr. — began to speak to the assembled crowd. Trump himself spoke last.

“We fight like hell. And if you don’t fight like hell, you’re not going to have a country anymore,” Trump said at one point while urging them to march down Pennsylvania Avenue to the US Capitol on the National Mall’s eastern end.

Trump supporters did exactly that. As they did, reports of trouble emerged quickly, according to the newly released emails.

“Vehicle with rifle on the back seat in plain view under police control while attempting to contact the owner,” read an update at 1:30 p.m. attributed to the Department of Homeland Security’s National Operations Center.

“… drone was detected east of the Washington Monument; [US Secret Service] has taken possession of the drone, unable to locate the operator.”

2 p.m.: “Crowds continue to gather at the Capitol … US Capitol is reportedly locked down due to multiple attempts to cross police barriers and police injuries.”

2:23 p.m.: “VPOTUS [Mike Pence] has been ushered from the US Capitol as protestors breach the Capitol Building. Additional open source reports indicate the US Senate is in recess due to a warning of an external threat.”

3 p.m.: “… one civilian shot in the chest inside of the US Capitol — UNCONFIRMED. DC Fire is performing CPR. DHS is working confirmation.”

The emails, which contained some redactions, also provided real-time fact-checking on rumors, such as when the FBI reported that a “threat to fly a plane into the Capitol building during inauguration deemed not credible …”

One dispatch concluded that a report of the Proud Boys “threatening to shut down the water system in the downtown area” was “not a credible threat.”

Emails exchanged between Patel and Ornato during the evening of January 6 include the subject line “fencing” — although it’s unclear from the highly redacted email whether it’s a reference to fencing for the White House, US Capitol, the Pentagon, or a different location.

The emails show the military’s situation planners were closely following the pro-Trump mob’s moves that day. Two days prior, Trump’s acting defense secretary had imposed further restrictions on the deployment of the DC National Guard, the closest force to back up Capitol Police, ordering they could not be equipped or interact with protesters without his approval.

The then-Capitol Police chief requested Defense Department forces at 1:49 p.m. after rioters breached the perimeter, but the acting defense secretary doesn’t approve that request until 3 p.m., delaying their response time; the first National Guardsmen at the Capitol arrived around 5:40 p.m.

The DC National Guard commander at the time said his forces were ready to respond much sooner, and a top official with the DC Guard accused the Army of covering up its response, claims the US Army has repeatedly denied.

Following the January 6 insurrection, fencing for months ringed the US Capitol complex grounds with National Guard members also defending it.

Ornato first emailed Patel at 11:36 p.m., indicating that Secret Service Deputy Assistant Director Mark Habersaat “can assist with vendor. Let me know if you need anything else. Thanks, Tony.” Most of the message’s other contents have been redacted.

Patel, who has since written a Trump-themed children’s book entitled, “The Plot Against the King,” is among the hundreds of people the US House’s January 6 select committee has interviewed as part of its ongoing investigation into the US Capitol attack and Trump’s role in it.

Shortly after the January 6 attack, an Insider reporter requested that the Department of Defense release a variety of records, including communications among members of the Joint Chiefs of Staff, National Security Council, and Executive Office of the President.

Months later, when the Department of Defense had not yet provided the requested records in compliance with the federal Freedom of Information Act, Insider sued the agency in US District Court for the District of Columbia, where the case is still pending.

“Additional productions will be made as we continue to coordinate the review of the remaining responsive documents DoD has in its possession,” Sparker wrote.

A Department of Defense spokesperson acknowledged, but did not respond to, several questions sent by Insider about the emails.