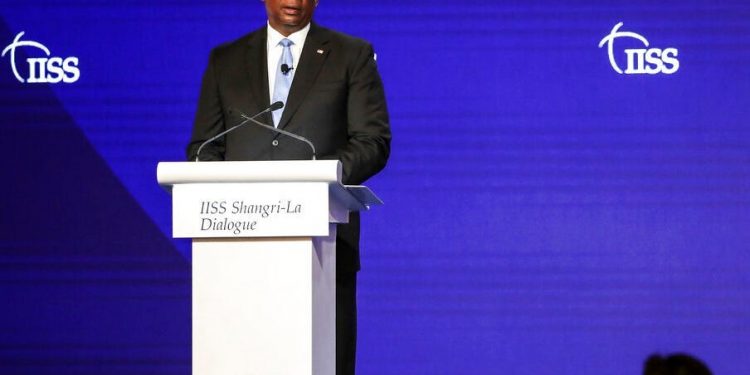 US Defense Secretary Lloyd Austin speaks during a plenary session at the 19th International Institute for Strategic Studies (IISS) Shangri-la Dialogue in Singapore on June 11, 2022.

US Defense Secretary Lloyd Austin while speaking in Singapore on Saturday articulated that the Russian invasion of Ukraine was a “preview of a possible world of chaos and turmoil.”

While speaking at the annual Shangri-La Dialogue, Austin remarked on the potential repercussions of the deadly invasion, which was launched by Russian President Vladimir Putin in February and has been widely condemned by an array of global leaders, notably those from NATO member countries.

“Russia’s invasion of Ukraine is what happens when oppressors trample the rules that protect us all. It’s what happens when big powers decide that their imperial appetites matter more than the rights of their peaceful neighbors. And it’s a preview of a possible world of chaos and turmoil that none of us would want to live in,” he said at the major Asian defense summit.

He added: “So we understand what we could lose. We see the dangers of disorder.”

The Pentagon chief then spoke of the importance of the “rules-based international order,” highlighting how Australia, Japan, New Zealand, and South Korea all helped Ukraine in the aftermath of the invasion, while also noting the critical contributions from India, Singapore, Thailand, and Vietnam.

Ukrainian President Volodymyr Zelensky also gave an address to the summit on Saturday — with his speech was conducted virtually — where he emphasized that the global order was being tested in his country.

“I am grateful for your support … but this support is not only for Ukraine, but for you as well,” Zelensky said, per Reuters. “It is on the battlefields of Ukraine that the future rules of this world are being decided along with the boundaries of the possible.”

Since Moscow launched its invasion of Ukraine, an alliance of leaders — including US President Joe Biden — have continued to appropriate money for arms necessary for the Ukrainian military to fight back against invading forces.

The first few weeks of the war featured critical errors on the part of the Russian military, with the country suffering major losses among its members on the ground and utilizing inadequate equipment.

Russia has recalibrated and in recent weeks has focused its actions largely in eastern Ukraine — largely in the Donbas region, which have included intense battles in the city of Severodonetsk.

Ukraine has pleaded for longer-range weapons from the West in order to counter the weaponry being used by Russia.

Vadym Skibitsky, the deputy head of Ukraine’s military intelligence, recently told The Guardian that the battle against Russia is “an artillery war now” and said his forces were currently “losing in terms of artillery.”

On Friday, Austin also met with his Chinese counterpart, Gen. Wei Fenghe, the minister of national defense, where he emphasized that the US did not “seek confrontation or conflict” as it pertains to Taiwan.

Since entering the White House last year, Biden has had several foreign policy rifts with China, largely as it relates to the United States’ stance of “strategic ambiguity” regarding Taiwan, which the Chinese government considers a breakaway province.