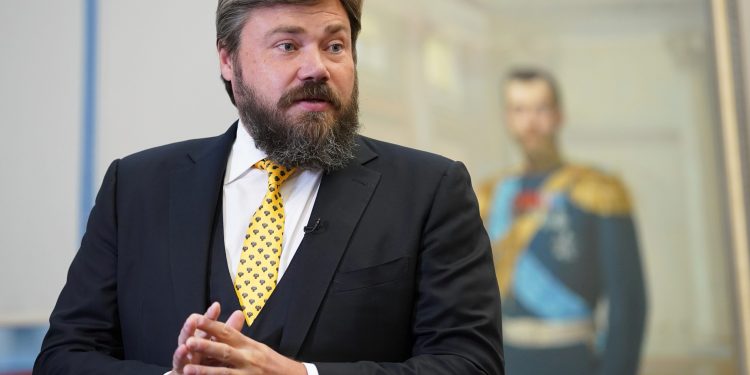 Konstantin Malofeyev, chairman of the board of directors of the Tsargrad media group, speaks during an interview with Reuters in Moscow.

The US Justice department charged Russian oligarch Konstantin Malofeyev on Wednesday with sanctions evasion — the first indictment of its kind since Russia’s invasion of Ukraine.

The FBI’s investigation of Malofeyev goes back several years, and concludes as some experts argue that sanctioning Russian oligarchs is a “PR exercise” that is “largely symbolic.”

Malofeyev, the founder of pro-Putin Russian television channel Tsargrad, was sanctioned by the US in 2014 over allegations he was “threatening Ukraine” and financially supporting a Moscow-backed separatist group. If arrested, he faces a maximum of 20 years in prison.

He is accused of conspiring with ex-Fox News director Jack Hanick to illegally transfer a $10 million US investment from a Texas-based bank to an associate in Greece. Hanick, who previously worked at Fox News for 15 years and allegedly helped launch the Tsargrad media group, was also charged with sanctions evasion last month.

The oligarch, who remains at large and is believed to be in Russia, said on state TV that Russia’s invasion of Ukraine is a “holy war” against “satanists” and “pagans,” the BBC’s Francis Scarr tweeted last week. The US does not have an extradition treaty with Russia.

Hanick, however, currently faces extradition from the United Kingdom to the United States, where he would be tried in New York City, according to the DOJ. Contact information for Hanick’s attorney could not immediately be found.