Ukrainian troops have recaptured territory in a key battle for eastern city in the Donbas, officials say 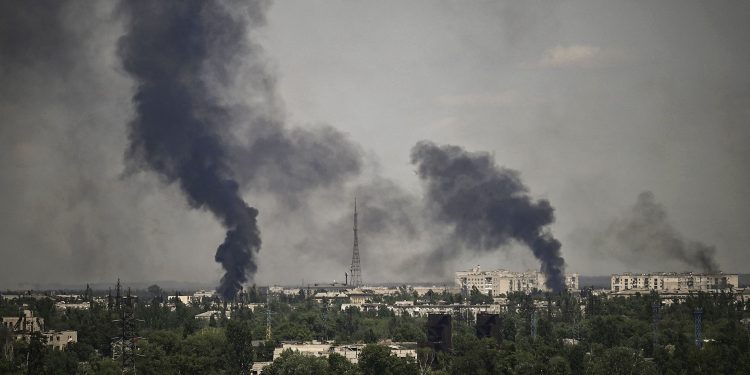 Smoke and dirt rise in the city of Severodonetsk during fighting between Ukrainian and Russian troops at the eastern Ukrainian region of Donbas on June 2, 2022.

Ukrainian forces have recaptured part of Severodonetsk, an eastern city in the Luhansk Oblast of Ukraine, which has been the focus of Russia’s offensive, according to officials.

Speaking on national television on Friday — day 100 of the Russian invasion — the governor of the Luhansk province, Sergiy Gaidai said that Ukrainian troops have managed to regain 20% of the land they lost to Russian forces, Reuters reports.

During his address, Gaidai said he is waiting to have “enough Western long-range weapons,” which he said will be used to “push their artillery away from our positions. And then, believe me, the Russian infantry, they will just run,” Reuters reported.

Writing on Telegram, Gaidi has said that the Russians “threw all forces” to capture the industrial city and have blown up bridges to stop Ukrainian forces from bringing military supplies and humanitarian aid to civilians.

While the number of Russian troops being killed in combat continues to rise —  Western estimates suggest that up to 15,000 Russian troops have been killed, and Ukraine puts the figure as high as 30,000 — Ukraine is also facing mounting losses.

A woman injured by the Russian shelling is being treated and medicated at the humanitarian center of the Severodonetsk city.

Speaking in an address on June 1, President Zelenskyy admitted that the Ukrainian troops are losing 60 to 100 soldiers a day, saying ‘the situation in the east of Ukraine is very difficult.”

However, the Russian advance in the eastern regions of Ukraine will not last, analysts told Insider before the latest reports from Severodonetsk emerged.

Speaking to Insider, Mathieu Boulègue, a senior research fellow on the Russia and Eurasia Programme at Chatham House, said that over the next few weeks, there will be “a shift between movement warfare, the advance of troops, to positional warfare. Basically, Russia is bunkering down inside Ukrainian territory.”

He added that the current advance will grind to a halt. The Russians are “full of exhaustion and this exhaustion will turn into attrition,” which he said has been mirrored in Kherson.

“We see this in Kherson, where Russia is bunkering down, instead of being more offensive and pushing deeper in Ukraine. This is what we see in Donbas,” said Boulègue.