Ukraine says Russia has 10 to 15 times more artillery than its military, warning that its survival hinges on the West sending more weapons 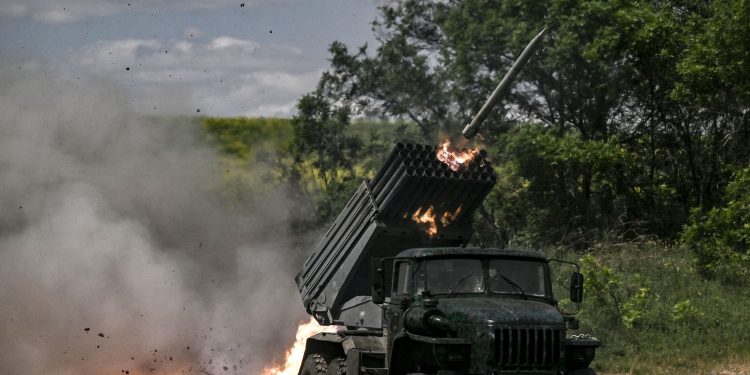 Ukrainian troops fire with surface-to-surface rockets MLRS towards Russian positions at a front line in the eastern Ukrainian region of Donbas on June 7, 2022.

Ukraine is warning Western countries that its survival depends on more weapons deliveries, saying it is currently outmatched by Russia in an artillery game.

Vadym Skibitsky, the deputy head of Ukraine’s military intelligence, told The Guardian in a recent interview that fighting Russia is “an artillery war now,” but cautioned that his side is losing “in terms of artillery.”

“Ukraine has one artillery piece to 10 to 15 Russian artillery pieces. Our western partners have given us about 10% of what they have,” Skibitsky said, adding that Ukraine is using thousands of rounds each day and its success hinges on more weapons deliveries from the West.

He added: “This is important in order to defeat the Russian aggressor, to restore the territorial integrity of Ukraine.”

Ukraine has previously and routinely urged Western countries to provide it with longer-range weapons to protect against Russian heavy artillery in the eastern Donbas region — the main theater of the 15-week-long conflict that has left thousands dead and millions displaced.

Russia is gradually making advances amid heavy fighting in Ukraine’s eastern Donbas region. There’s particularly fierce fighting in Severodonetsk, a city in the Luhansk region (which is part of the Donbas) that’s considered crucial to Russia’s strategy in the east. Zelenskyy has warned that the battle for Severodonetsk could decide the fate of the Donbas.

Mykhailo Podolyak, a senior adviser to Zelenskyy, on Thursday told the BBC that Ukraine was losing 100 to 200 soldiers per day amid the fighting. “The Russian forces have thrown pretty much everything non-nuclear at the front and that includes heavy artillery, multiple rocket launch systems and aviation,” Podolyak said, adding, “Our demands for artillery are not just some kind of whim…but an objective need when it comes to the situation on the battlefield.”

Serhiy Haidai, the governor of the Luhansk region, in a Telegram post on Thursday said that if Ukraine is able to get Western long-range weapons quickly it will help “clean up Severodonetsk in two or three days.”

Earlier this week, the UK said it would send “cutting edge” guided rocket systems and munitions to Ukraine to bring the country’s forces a “significant boost in capability” — a move that came after US President Joe Biden announced that he would send advanced rocket systems.

Russian President Vladimir Putin, meanwhile, has warned the West against sending Kyiv more weapons — claiming it would only “prolong” the war while threatening to retaliate by hitting new targets in Ukraine.

On Friday, Ukraine’s military intelligence directorate in a Telegram post said it assessed that Russia could “continue the war at its current pace for another year.”