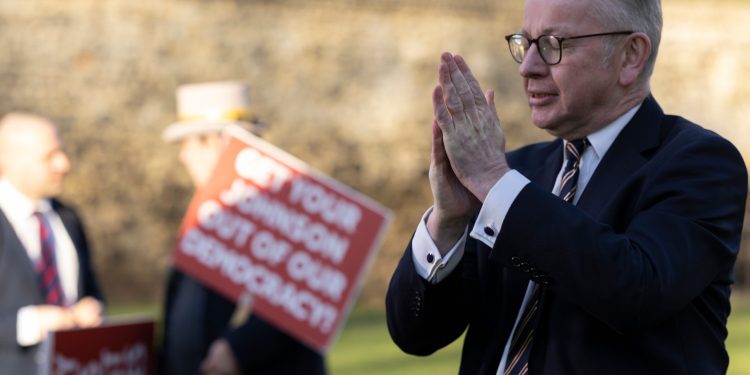 Michael Gove, leveling up secretary, speaks to journalists in Westminster

UK Prime Minister Boris Johnson has sacked Michael Gove, one of the most senior ministers in his government, as he begins to fight back against the current leadership crisis.

Gove, who was the housing and leveling up secretary, told the prime minister he should resign earlier today, sources told Insider.

One source said the message to Johnson was “brutal.”

Gove’s intervention came before Sajid Javid, the health secretary who resigned late Tuesday night, called on Cabinet ministers to act, saying “not doing something is an active decision.”

Cabinet ministers Brandon Lewis, Simon Hart, Grant Shapps, and Priti Patel were among those who visited Downing Street to urge Johnson to stand down, sources said.

However others, including the recently-appointed chancellor Nadhim Zahawi and long-time ally Nadine Dorries, offered support behind the prime minister.

James Duddrige, MP for Rochford and Southend East and PPS to the prime minister, told Sky News that Johnson was in a “buoyant” mood” and “he is up for a fight.”

Duddrige continued: “Nadhim Zahawi is solidly behind him, so reports there were wrong.”

Johnson would focus on tax cuts and other “red meat,” Duddridge said, adding that Johnson “has got a 14m mandate from the British public — he now needs to deliver [on] that. Now is not the time for a stupid election.”

Through a turbulent Wednesday, dozens of junior ministers and aides quit the government, leaving some MPs to speculate that there would not be enough backbenchers able to fill the vacancies.

But Duddridge told Sky News there would be “some major appointments made tonight,” and that there were many MPs “keen, willing, and able to serve.”

But one MP told Insider that Johnson was “delusional” if he thought he could remain in place.

Another MP said he expected as many as three-quarters of the Cabinet to resign in the coming days, after several senior ministers visited Johnson to tell him he must go on Wednesday afternoon and evening.

A third MP said Johnson would have to resign “tonight, maybe tomorrow — either way he’s gone.”