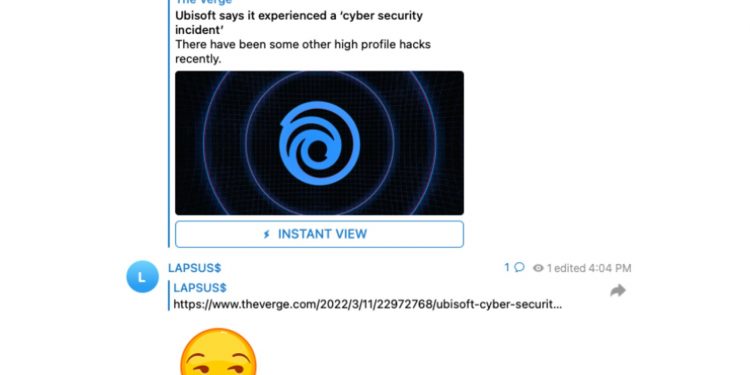 South American hacking group Lapsus$ is claiming responsibility for another high-profile hack. On Thursday, Ubisoft said it underwent a “cyber security incident” last week that saw some of its games, systems and services temporarily disrupted. At the time, the company didn’t identify who may have been responsible for the incident, but just one day later, Lapsus$ began to seemingly take credit.

After The Verge published a story on the incident, a Telegram channel allegedly run by the group posted a link to the article and a smirking face emoji, suggesting it was claiming responsibility for what had happened. It also said that it had not targeted user data in the breach.

“Our IT teams are working with leading external experts to investigate the issue,” Ubisoft said Thursday. “We can confirm that all our games and services are functioning normally and that at this time there is no evidence any player personal information was accessed or exposed as a by-product of this incident.”

Friday’s claim comes less than a week after the same group took credit for obtaining about 190GB of data from Samsung. Previously, Lapsus$ said it was responsible for the NVIDIA hack that saw the source code for the company’s DLSS technology leak online.