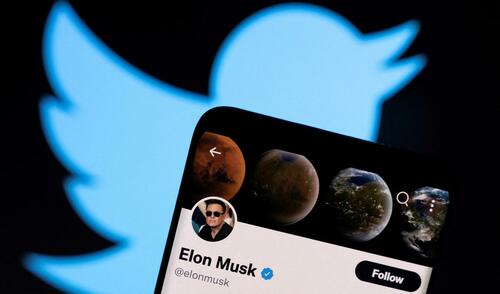 Having tweeted a somewhat clear indication that he would be ‘tender’-ing for the leftist sanctuary, Elon Musk filed a 13D filing laying out some more details surrounding his considerations and the fact that this time ‘funding is secured’.

The world’s richest man has hinted for days that he planned to increase his stake by making a tender offer.

In recent days he has tweeted apparent references to his next move in the takeover fight, mentioning the Elvis Presley ballad “Love Me Tender” and the F. Scott Fitzgerald novel “Tender Is the Night.”

Musk’s bid is backed by a mix of debt and cash.

The investment bank Morgan Stanley and a group of other lenders are offering up $13 billion in debt financing and another $12.5 billion in loans against Mr. Musk’s Tesla stock.

Musk is expected to add about $21 billion in equity financing.

A deal along the lines outlined in Musk’s 13D would be the largest leveraged buyout in decades.

On April 13, 2022, the Reporting Person delivered a letter to the Issuer (the “Letter”) which contained a non-binding proposal (the “Proposal”) to acquire all of the outstanding Common Stock of Twitter not owned by the Reporting Person for all cash consideration valuing the Common Stock at $54.20 per share (the “Proposed Transaction”). The foregoing description is qualified in its entirety by reference to the full text of the Letter, a copy of which is attached hereto as Exhibit B and is incorporated herein by reference.

The Proposal was (and remains) non-binding and, once negotiated and agreed upon, would be conditioned upon, among other things, the: (i) receipt of any required governmental approvals; (ii) confirmatory legal, regulatory, accounting and tax due diligence; and (iii) negotiation and execution of definitive agreements providing for the Proposed Transaction. At the time of delivery, the Proposal was also subject to the completion of financing and business due diligence, but it is no longer subject to financing as a result of the Reporting Person’s receipt of the financing commitments described below and is no longer subject to business due diligence.

On April 15, 2022, Twitter adopted a rights agreement, dated as of April 15, 2022 (as it may be amended from time to time, the “Rights Agreement”), by and between Twitter and Computershare Trust Company, N.A., as rights agent, and declared a dividend of one right issued pursuant to the Rights Agreement for each outstanding share of Common Stock (the “Poison Pill”).

Twitter has not responded to the Proposal. Given the lack of response by Twitter, the Reporting Person is exploring whether to commence a tender offer to acquire all of the outstanding shares of Common Stock (together with the associated rights issued pursuant to the Rights Agreement (the “Rights” and, together with the Common Stock, the “Shares”)) that are issued and outstanding (and not held by the Reporting Person) at a price of $54.20 per share, net to the seller in cash, without interest and less any required withholding taxes, subject to certain conditions (the “Potential Offer”), but has not determined whether to do so at this time.

To finance the Proposed Transaction or a Potential Offer, entities related to the Reporting Person have received commitment letters committing to provide an aggregate of approximately $46.5 billion as follows:

(iii) An equity commitment letter, dated April 20, 2022 (the “Equity Commitment Letter”), from the Reporting Person pursuant to which the Reporting Person has committed to provide equity financing for the Proposed Transaction or the Potential Offer sufficient to pay all amounts payable in connection with the Offer and the Merger (plus related fees and expenses), net of the amounts to be funded pursuant to the Debt Commitment Letter and the Margin Loan Commitment Letter, which is currently expected to be approximately $21 billion (the “Equity Financing”).

This sent TWTR shares jumping this morning, but they remain notably below the $54.20 offer…

And as TWTR rallies, so Trump’s Social Media SPAC is tumbling…

A spokesman for Twitter confirmed the company had received the updated proposal.

“As previously announced and communicated to Mr. Musk directly, the Board is committed to conducting a careful, comprehensive and deliberate review to determine the course of action that it believes is in the best interest of the Company and all Twitter stockholders,” the spokesman said.

Twitter is likely to address Mr. Musk’s bid in more detail when it reports quarterly earnings on April 28.

Unleash the blue-check hatred once more…