Twitter – How I Buy Before Elon Musk Hostile Take Over ? 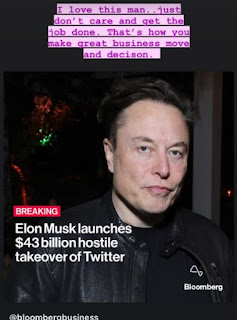 Elon Musk announced that he offered to take over Twitter at $54.20 worth $43 billion yesterday and it created major headlines in the media that sent the stock prices up to $52.70 at one point in the pre market which I thought it was very wise to sell. The sad part was it was 6.30pm here in Asia while the market wasn’t opened yet but I still believe it’s a time to sell nevertheless when the pre market opened at 7.00pm and that’s what I decisively did between 7:11pm – 7:16pm, secretly unloading all my Twitter 30,000 shares to lock in great profits. Unfortunately, the prices had flipped and trended lower to the $50.70-$50.90 range where $52.70 wasn’t possible anymore. Well, I have to qualms over making lesser profits as the most important thing is still doing what my experience tells me to do and that’s to sell everything and don’t touch this stock anymore regardless of what Elon Musk is going to do next.
What sets me apart from other traders/investors and made me happy was not the $102,000 USD profits made in 2 contra days in Twitter but rather most people couldn’t and wouldn’t sell at $50.80 at the premarket while I believed it was the right thing to do because back in my head, I already knew that when market opened at 9.30pm, it might not be possible anymore. True enough, as of closing at 4am, exactly to my prediction, the highest Twitter touch was only $48.50, two dollars shy off my sell price, which would have short changed $60,000 USD from my profits. I wouldn’t call this lucky, but wisdom and many experiences guided me to sell and lock in profits.
Now comes the holy secret. So what prompted me to buy Twitter shares on Tuesday 12th April was the obvious signal that was flashing in the 15 minute chart. The hidden buying, that long accumulation zone and most importantly followed by that weak selling was key pointers for this particular trade to buy before Elon Musk official takeover news that was released 2 days later after my purchased. If you studied my trades, I in fact traded in/out 13 times before deciding that my last bulk of purchase would be to hold it overnight and swing the position. As for why I traded in/out 13 times, there was a purpose to it and that’s to catch the best possible lowest prices and the best turning point using lower time frame charts so that my cut loss would be very tight should anything happens and at the same time I could first make some small punting profits.
What I taught in my course and what I wrote in my SOMM manual all materialized in this Twitter trade where I would say it’s an open text book answer as everything is very straight forward from start to finish in terms of predicting prices move before it actually happens. Did I know Elon Musk is going to offer a takeover in Twitter? I don’t know but based on how the chart was setup and orchestrated, the possibility was 78% and hence I traded almost $1,500,000 USD down confidently on this stock to attest my prowess in my chart reading skills. 11% in 2 days is the best testament of my conviction and the strategies I taught in my class and the manuals I sold.