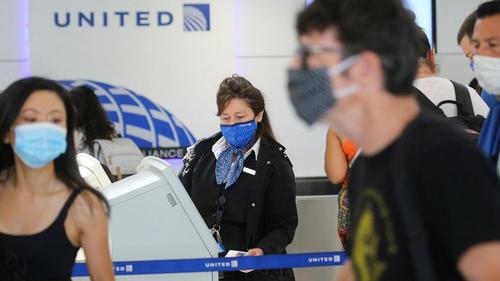 Airlines have canceled more than 20,000 flights since Christmas Eve as coronavirus outbreaks among workers disrupt schedules across the US.

United Airlines Holdings Inc. Chief Executive Officer Scott Kirby described in an internal memo to workers on Tuesday that the rapidly spreading omicron variant of COVID-19 has resulted in thousands of its workers calling out sick, forcing the airline to reduce its near-term flight schedule.

“In one day alone at Newark, nearly one-third of our workforce called out sick,” Kirby wrote. “To those who are out sick or isolating, we wish you a speedy recovery.”

He said approximately 3,000 of its workers are currently infected. That figure represents about 3.5% of its 85,000 employees.

A company spokeswoman told Bloomberg the airline would reduce its flight schedule in January and February “on an ongoing basis” to adapt to fluctuating staffing levels. There was no word from the airline on capacity numbers for the schedule reductions.

The move by the airline comes as staffing issues plague the entire airline industry. More than 20,000 flight cancellations have been recorded since Christmas Eve due to workers calling out sick and the weather. This stranded travelers across the country as crew failed to show up during the busiest travel season of the year.

Reduced flights and staffing shortages will make air travel a nightmare for passengers this winter season.