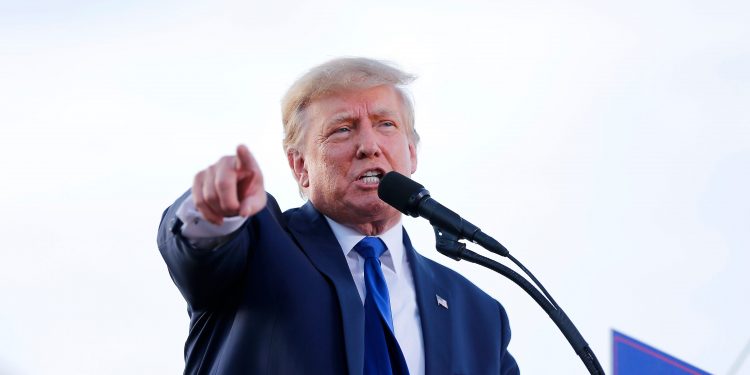 Former President Donald Trump on Tuesday unleashed a dozen social media posts in the wake of the testimony of a former top White House aide before the January 6 committee, calling the staffer a “total phony,” “third rate social climber’ and suggesting she was a “whacko” because of her handwriting.

“There is no cross examination of this so-called witness. This is a Kangaroo Court!” Trump wrote on his social media platform.

In another post, he said that her “body language is that of a total bull…. artist. Fantasy Land!”

Trump’s response mirrors how he would use Twitter during his presidency, particularly after he was publicly criticized or news came out of special counsel Robert Mueller’s probe. Trump was kicked off of Twitter and Facebook in the wake of the January 6 Capitol riot, leading him and his allies to create their own platform.

As Fox News’ Bret Baier noted, Hutchinson made her claims under oath while Trump was just ranting online. It is a crime to lie to Congress, as former Trump attorney Michael Cohen found out.

Trump has a well-documented, decades-long proclivity for stretching the truth or just outright lying. One of his most debunked claims as president was that he passed legislation to improve veterans’ health care when it was easily verifiable that President Barack Obama signed the bill into law. Trump made this claim more than 156 times, as The Washington Post meticulously documented.

Cassidy Hutchinson, who was a top aide for then-White House chief of staff Mark Meadows, told lawmakers that Trump, in a fit of desperation, tried to commandeer the presidential limousine in an effort to travel to the Capitol on January 6 while Congress certified his election loss.

Trump denied that he tried to hijack his own limo (“Fake story”) and on a different occasion threw his food against the wall after becoming enraged by statements made by Attorney General Bill Barr (“also false”). The former president used all caps to emphasize that he “NEVER SAID” that then-Vice President Mike Pence deserved to be hung for not trying to overturn the election.

In another vintage Trump move, the former president tried to repeatedly claim that he “hardly” knew Hutchinson, despite the fact that she worked just steps from the Oval Office and was a top aide to the White House chief of staff, a post that is considered to be among the most powerful in the entire federal government.

“I hardly know who this person, Cassidy Hutchinson, is, other than I heard very negative things about her (a total phony and “leaker”) …,” Trump wrote.

Posting so frequently at one point, Trump misspelled the last name of Rep. Liz Cheney, the vice chair of the House January 6 Committee.

“Chaney conveniently left out the snippet in my speech to, “GO PEACEFULLY & PATRIOTICALLY.
Trump wrote. “Isn’t she disgraceful???” (Trump was noting that when he told rally attendees to march to the Capitol on January 6, he added that they should do so “peacefully and patriotically.”)

Hutchinson’s testimony undermined these claims by making the jaw-dropping allegation that Trump wanted the metal detectors, or mags, set up around the site of his speech on the Ellipse to be taken down since the crowd wasn’t big enough.

“Something to the effect of take the f-ing mags away,” Hutchinson testified that Trump said on January 6. Hutchison added that Trump was informed that some people attempting to enter the rally were armed and that the Secret Service had confiscated weapons as a result. The president didn’t care, she said.

“When we were in the offstage tent, I was in the vicinity of a conversation where I overheard the president say something to the effect of, ‘I don’t effing care that they have weapons,” Hutchinson testified. “They’re not here to hurt me. Take the effing mags away. Let my people in, they can march to the Capitol from here. Let the people in. Take the effing mags away.”

Perhaps it is fitting that on a day Trump seemed to return to his old form once again disputed claims about crowd size would come into focus. But this time it was not a White House press secretary bellowing out from behind a lectern.

On Tuesday, it was just a former president fuming on the social media platform created especially for him.

“Never complained about the crowd, it was massive,” Trump claimed of the January 6 rally crowd. “I didn’t want or request that we make room for people with guns to watch my speech. Who would ever want that? Not me!”