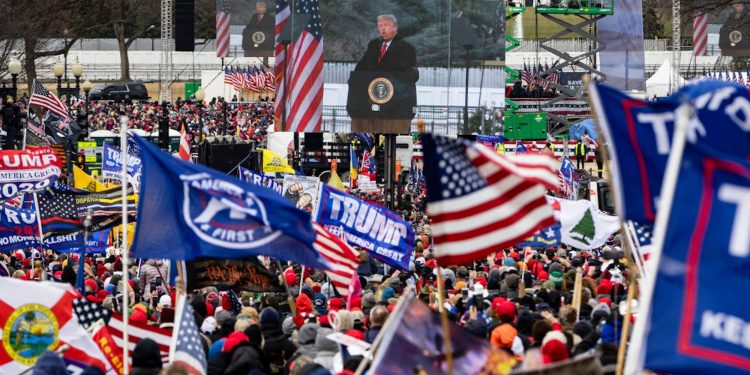 Then-President Donald Trump with suporters on January 6, 2021, before the Capitol riot.

Former President Donald Trump praised a far-right website that helped promote the baseless conspiracy theory that the FBI instigated the violence in the Capitol riot.

In a statement Sunday, Trump praised Revolver News, which has for months been pushing the conspiracy theory. It is run by Darren Beattie, who workefd as a speechwriter in his administration.

“Congratulations to Darren Beattie and Revolver News who have exposed so much of the Fake News’ false narrative about January 6th. Because of Darren’s work, and others, Americans aren’t buying into the Unselect Committee’s attempts to smear 75 million (plus!) Americans. The newly minted term ‘Fedsurrection,’ was even trending!” wrote Trump.

Revolver News, a fringe aggregation website with some right-wing commentary, has been cited frequently by top-rated Fox News host Tucker Carlson in his promotion of the FBI-plot conspiracy theory, which holds that federal agents sparked the attack on the Capitol to discredit Trump supporters.

Beattie is a frequent guest on Carlson’s show.

In a fact check of his theory, the Associated Press noted that it rests on the claim that many of those who took part in the violence at the Capitol have not been indicted.

This, Beattie groundlessly claims, shows that they are FBI agents.

Carlson propelled the claims to a wide audience in a recent three-part documentary which attempts to whitewash the role of Trump supporters in the violence. It prompted the resignations of two staffers at Fox.

According to a report in Axios, Trump was planning to further trumper the FBI theory in a speech on the anniversary of the riot, which he instead canceled.

Beattie worked as a speechwriter for the Trump administration, before being fired in 2018 over attending a conference at a group, the Mencken Club, that was also attended by a white supremacist.

He in the closing days of the Trump adminsitration, Beattie was appointed to the Commission for the Preservation of America’s Heritage Abroad, which oversees sites including Holocaust memorials.

The appointment was widely criticized. Insider has contacted the board to confirm whether Beattie is still serving.