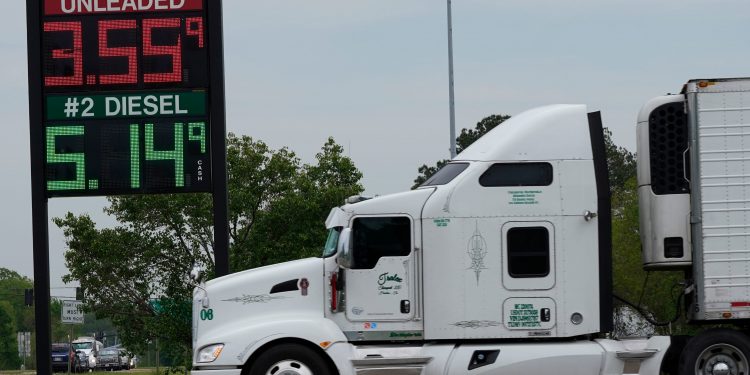 Truck passes sign at Flying J Truck Stop in Pearl, Miss., in April. The trucking industry offsets diesel prices through a fuel surcharge, which is calculated through a base rate that is usually added to a shipper’s freight bill.

A Facebook post from the owner of a Texas trucking company went viral last week after he warned that skyrocketing diesel prices could have longterm consequences for the US supply-chain.

Austin Smith, owner of Iron River Express, said it has cost him over $20,000 a week to keep his three trucks running.

“If something drastic doesn’t change in the next few weeks/months, I promise you, you’ll see empty shelves everywhere you look,” Smith wrote in a post that was shared nearly 290,000 times. “You’ll see chaos as people fight for the basic necessities of everyday life.”

Smith did not respond to a request for comment from Insider in time for publication.

Insider spoke with five truckers who warned that the industry could be at a breaking point. The drivers say they’ve had to get creative in recent months as they work to turn a profit while spending thousands at the pump.

Richard Resek, a trucker based out of ports in New York and New Jersey, told Insider he’s turning off his truck and rolling down his window instead of using air conditioning during long summer nights. He also plots out gas stations with the cheapest fuel prices.

Running at a loss

Diesel prices have surged over 76% in the past year. Last month, Insider reported that the diesel market is facing its worst crisis since the 1970s. Prices are at a record $5.75, according to data from AAA.  For truckers like Resek, that means they’re spending as much as $1,700 refueling their trucks each day.

Nick, a trucker who owns a small carrier in Maryland, told Insider he’s had to take loads at a loss.

“I have the option not to run my fleet at all, but I care more about keeping my drivers busy,” said Nick, who prefers to go only by his first name due to a pending lawsuit. “Drivers are the most important asset and sometimes that means I have to accept loads that are not in my favor.”

Nick detailed an instance in April when he woke to find that thieves had siphoned over $1,000 worth of fuel out of his truck.

Diesel prices have surged over 76% in the past year. Last month, Insider reported that the diesel market is facing its worst crisis since the 1970s.

The trucking industry offsets diesel prices through a fuel surcharge, which is calculated through a base rate that is usually added to a shipper’s freight bill. But, Resek said drivers typically never sees a breakdown of the costs from brokers or carriers — meaning there are instances when companies keep the fuel surcharge for themselves.

Shauntai Robinson, the owner of Mid-Carolina Transportation, told Insider that the elevated fuel prices will likely push new business owners out of the industry after a record numbers of trucking companies opened in 2021.

“The industry is overrun with new carriers that don’t know how to quote a rate,” Robinson said. “They’re so focused on competing for a load that their quotes are unrealistic. They won’t be able to sustain that.”

Two truckers told Insider they are considering leaving the industry due to fuel prices.

“We’re all just trying to stay afloat and at times I have to stop and ask myself if it’s worth it,” Resek, who has been driving for seven years, said. “Trucking is not what it used to be and we seem powerless to do anything about it.”

Earlier this year, CEO of the American Trucking Association Chris Spear said the industry is facing a “chronic” shortage of about 81,000 drivers. Insider has previously reported that experts say notions of a trucker shortage are overblown.