Trans Swimmer Nominated For NCAA Woman Of The Year Honors 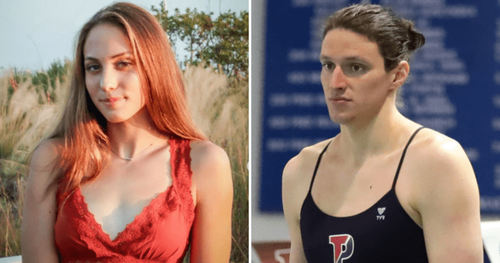 Trans Swimmer Nominated For NCAA Woman Of The Year Honors

Determined to lead the Ivy League to the absolute depths of woke irrationality, the University of Pennsylvania has nominated trans swimmer Lia (née Will) Thomas to receive NCAA Woman of the Year honors.

For any rational observer, it’s clear that the mindless pursuit of “inclusion” of trans athletes results in the utter obliteration of fair play – with the damage not only inflicted on opponents but also on teammates who are nudged out of positions.

Those truths were proclaimed in a February letter to Penn and the Ivy League sent on behalf of 16 of Thomas’s Penn Quaker women’s swim team members, imploring the institutions not to stand in the way of proposed rule changes that could have precluded Thomas from competing at the NCAA championships:

“We fully support Lia Thomas in her decision to affirm her gender identity and to transition from a man to a woman. Lia has every right to live her life authentically. However, we also recognize that when it comes to sports competition, that the biology of sex is a separate issue from someone’s gender identity.

Biologically, Lia holds an unfair advantage over competition in the women’s category, as evidenced by her rankings that have bounced from #462 as a male to #1 as a female.”

Thomas ended up competing in the NCAA championship anyway, and took home the gold in the 500-yard freestyle, beating the University of Virginia’s Emma Weyant. Fortunately for biological-woman swimmers in NCAA Division I, that marked the end of Thomas’ collegiate eligibility.

Penn has come under withering fire from both men and women for allowing Thomas to use an unmistakably male physique to clobber biological women. Even trans celebrity and former Olympic star Caitlyn (née Bruce) Jenner said:

“Lia Thomas is one of the worst things that happened to the trans community because it’s such bad publicity…biological boys, I’ve said from the beginning, should not be playing in women’s sports. We need to protect women’s sports.”

Fed up with the madness, the International Swimming Federation last month essentially barred transgender athletes from competing in women’s competition, a move that will preclude a Thomas medal-stealing expedition in the Olympics. The vote wasn’t close: 71.5% of the organization’s member federations approved it.

Were Penn a clear-headed entity, it would have let the March NCAA championship mark the end of the Lia Thomas firestorm. However, that wouldn’t advance the Philadelphia school’s quest to out-woke the other seven institutions of the increasingly laughable Ivy League.

And so, here come the Quakers with a Woman of the Year nomination for someone who – to use a word abused by the campus Diversity-Equity-Inclusion safe-zone cultists – has “harmed” many women’s athletic experiences.

Not enough fabulous biological women athletes, NCAA?!? What is wrong with you?!!!!!!!? https://t.co/5QAJyt0Qab

We condemn the nomination of a male for @NCAA Woman of the Year. @pennathletics & @IvyLeague selection surrenders another accolade meant to celebrate female accomplishments. Women deserve fair competition and acknowledgement that the best collegiate female athletes are not male. https://t.co/mAeOASTt2r

Penn nominated transgender swimmer Lia Thomas as their NCAA woman of the year. Hell of an accomplishment to be woman of the year after only being a woman for a couple of years. https://t.co/gW3acTQ1Jl