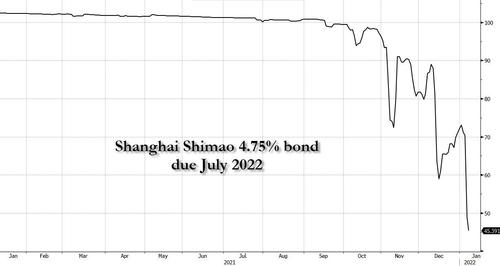 On Saturday, we discussed that what may arguably be the trade of the year, one with the most convex, best Upside/Downside opportunities we have encountered in a while, had emerged in China courtesy of the latest panic in Beijing which saw China’s authorities finally realize they need to step in and bail out the imploding property development (and housing) sector.

Specifically, in the latest gradual easing of financial conditions in the property market, regulators told banks to step up lending to developers after at least two quarters of consecutive declines. At the same time, borrowing by major property firms used to fund mergers and acquisitions will no longer be counted toward the notorious three red lines metrics that limit debt, which as we said, suggested that “a wave of consolidation is about to sweep China which should stabilize the property market at least in the short-term as insolvent firms are absorbed by their viable peers.”

We didn’t have long to wait because just one day later, on Monday, shares of massively beaten down Shimao Group which we previously said had become a distressed bellwether for financial contagion in the property industry due to its recent investment grade rating and sudden collapse in bond prices…

… soared as much as 14% in Hong Kong – a surge that continued on Tuesday morning – after a report in REDD that state-backed property giant China Vanke was in talks with the developer for asset acquisitions (i.e. a soft nationalization), a move made possible just days earlier by Beijing’s latest directive easing loans for M&A in the space. Incidentally, this took place just as Moody’s and S&P both downgraded Shimao’s credit rating.

And with a growing likelihood of a white knight bailout, Shimao’s deeply beaten down dollar bonds also climbed after the report, with a note due in July rising 3 cents on the dollar to 47.6 cents after cratering as low as a record 26.6 cents last week.

Now, of course, none of the above suggests that China’s property sector is fixed; in fact as Bloomberg’s Sofia Horta e Costa writes, Shimao’s unprecedented 19% rally on Monday was more a result of short covering rather than a shift in sentiment, noting that it doesn’t take much for a short squeeze. And since the developer had lost almost 90% of its market value since a record in 2020, betting against the stock was a popular trade among hedge funds, meaning that more than 16% of its free float was sold short as of Friday, according to IHS Markit data, near the highest level since 2012.

But that’s precisely the reason why the risk/return on Chinese housing is so extremely high: with virtually all bad news priced in, the real convexity is in the explosive move higher that any piece of good news would trigger, whether it be a state-mandated white knight bailout, or even more easing from China which has now clearly ended its experiment with crushing the most important asset in its economy.

It’s also why we said on Saturday that a pair trade of shorting US homebuilders – especially with the Fed set to hike rates, pushing mortgage rates higher and hitting US homebuilders in the process – and with going long Chinese property developers now that China is officially panicking and soon willing to do anything to support its housing market could be the best trade of 2022.

Sure enough, just one day later, having hit an all time low just this past Friday, the pair trade is already starting to move rapidly higher…

… a move which will only accelerate as the squeezed shorts flee to cover.

Which is not to say this is a risk-free trade: on the contrary, this week will be a major test for China’s real estate sectoras Guangzhou R&F has a $725 million bond coming due on Thursday, plus another $21 million in interest, while Evergrande is seeking to avoid its first default on a yuan bond the same day when bondholders vote on whether to allow the firm to defer payment. However, if recent overtures from Beijing are any indication, China’s authorities have decided that there has been enough pain in the property sector and it is now time to ease the pain.

If that is the case the only question is not if but when the ratio of Chinese to US housing recover all of the losses observed in the post-Covid era.