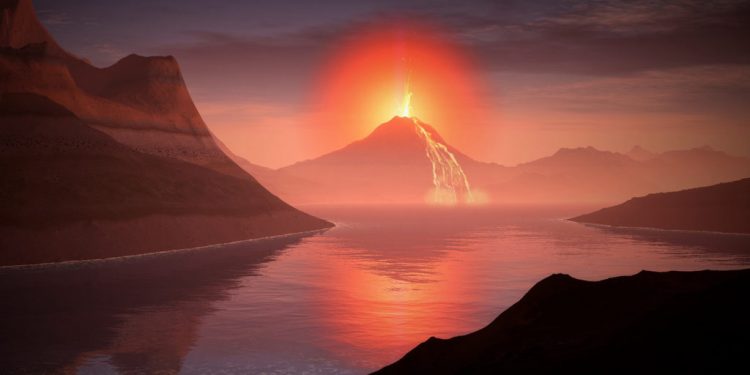 For their study, scientists selected 3 ice cores each from Antarctica and Greenland, each covering the past 60,000 years. Large volcanic eruptions cause sulfur dioxide gases to be ejected into the stratosphere and lower global temperatures. Traces of acid rain in continuous ice cores in different parts of the Earth allow to establish the scale of such events.

Researchers found traces of 1,113 eruptions in Greenland and 737 in Antarctica. The layers of each sample were time-dated, allowing them to compare traces of the same volcano in different slices. The analysis showed that 85 eruptions had at least a 7 on the volcanic activity scale (VEI), 69 of them surpassing the 1815 Tambora eruption in Indonesia.

The April 1815 eruption of Tambora volcano is the largest eruption on record. Its intensity is estimated at 7 on the VEI scale. The volume of substances released into the atmosphere exceeded 150 million cubic kilometers. The eruption was followed by a “volcanic winter”, and the year 1816 was called the “year without sun” because of the abnormal cooling.

In addition, scientists have found traces of two previously unknown volcanoes that surpass the eruption of Oruanui volcano Taupo, located in what is now New Zealand. This catastrophe occurred about 25.5 thousand years ago and was considered the largest eruption in the last 70 thousand years. The method used does not allow us to identify specific volcanoes, but we know that one eruption occurred about 45,500 years ago in the northern hemisphere and the second eruption occurred 38,000 years ago in the southern hemisphere.

“The results of our study suggest more very large eruptions than previously thought based on geological data,” the scientists said. – At the same time, in general, volcanic activity has not changed significantly over the entire study period and is consistent with data from the last millennium.”

Scientists recorded increased volcanic activity only at the end of the last ice age (16,000-9,000 years BC). During this period, more large eruptions occurred in the northern hemisphere. Researchers believe that this is due to the melting of the ice sheets, which caused a redistribution of the load on the lithospheric plates.

Scientists found the healthiest people on Earth: It’s all about a unique lifestyle

The dangers of free VPNs. Why they can’t be downloaded and how to protect yourself?