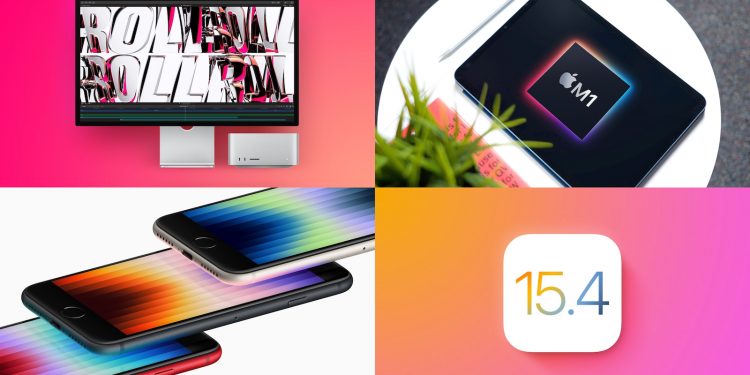 Following last week’s Apple event, this week remained busy with the launch of all of the hardware introduced at the event, as well as the next round of operating updates.

Ahead of Friday’s hardware launch, we saw early media reviews of the Mac Studio, Studio Display, iPad Air 5, iPhone SE 3, and even some hands-on looks at the new green iPhone 13 and iPhone 13 Pro colors.

We also saw the public release of iOS 15.4 and associated updates with a bunch of new features including the long-awaited Universal Control, so read on for all of the details on these stories and more!

Just over a week after Apple introduced the Mac Studio, the first reviews of the desktop computer have surfaced.

The first Mac Studio reviews have been overwhelmingly positive, with reviewers praising the computer for its impressive performance. When configured with Apple’s new M1 Ultra chip, the Mac Studio is faster than a Mac Pro with a 28-core Intel processor, which costs $12,999.

The first reviews of Apple’s Studio Display are out, and one common criticism among reviewers was that the webcam’s image quality ranges from equivalent to an “old BlackBerry” to downright “awful.”

In response, an Apple spokesperson said the company “discovered an issue where the system is not behaving as expected” and will be “making improvements in a software update,” without specifying further.

While reviews of the third-generation iPhone SE praised the addition of a faster A15 chip and 5G support at a budget-friendly $429 price point, the device still has the same design as the iPhone 8 from 2017.

Other key features of the new iPhone SE include longer battery life, more durable glass, new camera features, the return of a 256GB storage option, and an increased 4GB of RAM.

The new fifth-generation iPad Air began arriving to customers on Friday and, ahead of the launch, the first reviews of the device were shared online while we’ve already started to go hands-on with our own unit.

Overall, the new iPad Air remains a great value, with performance now on par with the iPad Pro thanks to the addition of the M1 chip. The new iPad Air also features 5G connectivity on cellular models, an upgraded 12-megapixel front camera with support for Center Stage, up to a 2x faster USB-C port for data transfer, new color options, and more.

iOS 15.4 Released: Here is Everything New

Apple this week released iOS 15.4 and iPadOS 15.4 to the public following nearly two months of beta testing, and there are several new features for iPhone and iPad users to check out.

Notably, iOS 15.4 lets you unlock an iPhone with Face ID while wearing a mask, with no Apple Watch required. This is just one of many new features, so be sure to check out our list of everything that is new in iOS 15.4.

Kuo: Only iPhone 14 Pro Models to Get A16 Chip, Standard Models to Retain A15

Should this information be accurate, it seems plausible that Apple might only offer a new chip with the “Pro” models, and then that chip would trickle down to the two cheaper ‌iPhone‌ models the following year.

So if you want to have top stories like the above recap delivered to your email inbox each week, subscribe to our newsletter!Tag: Top Stories
This article, “Top Stories: Mac Studio and Studio Display Now Available, iOS 15.4 Released, and More” first appeared on MacRumors.com