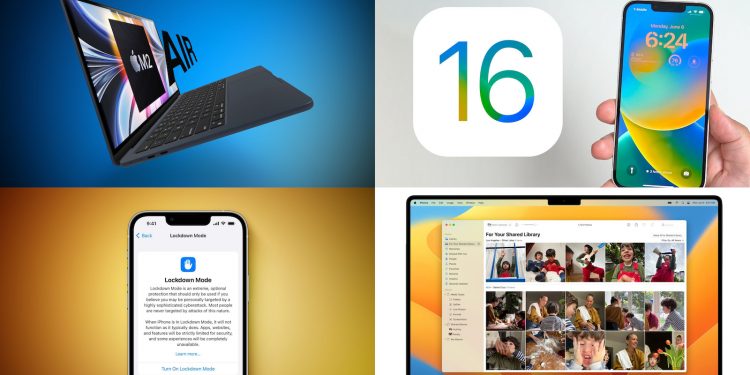 Apple’s completely revamped MacBook Air is here! In line with our report from late June, Apple has now started taking orders for the new notebook ahead of a launch next week.

This week also saw the release of the third set of developer betas for iOS 16, macOS Ventura, and other upcoming updates, and we’re expecting public betas to debut next week. Finally, we’re continuing to hear rumors about Apple’s product pipeline for the iPhone and Apple Watch, so read on below for details on all of these stories!

Apple on Friday began accepting orders for the new MacBook Air equipped with the M2 chip, after announcing the date earlier in the week to confirm our exclusive report from last month. The first deliveries to customers and in-store availability will begin one week later on Friday, July 15, but launch-day availability is already starting to slip.

Apple this week released the third betas of iOS 16, iPadOS 16, macOS Ventura, watchOS 9, and tvOS 16, and a handful of new features have been added across the platforms.

We’ve unpacked everything new in the latest iOS 16 beta for the iPhone, including a new Lockdown Mode that offers “extreme” security for high-profile individuals targeted by state-sponsored spyware, a new Clownfish wallpaper inspired by the original iPhone, Lock screen changes, and more.

Apple shared more details about the new Lockdown Mode enabled in the third betas of iOS 16, iPadOS 16, and macOS Ventura this week.

Lockdown Mode is found in the Settings app under Privacy & Security. When enabled, Apple said the optional feature provides an “extreme” level of security by strictly limiting or disabling the functionality of features, apps, and websites, such as Safari, Messages, and FaceTime.

The new iCloud Shared Photo Library feature that Apple previewed at WWDC has been enabled in the third betas of iOS 16 and macOS Ventura this week.

‌iCloud‌ Shared Photo Library is designed to make it easier for you to share photos with your family members or friends. The feature allows you and up to five other people to add, edit, or remove photos in a shared library accessible across multiple devices via iCloud.

Apple Watch Series 8 Might Be Able to Detect a Fever

Apple Watch Series 8 models launching later this year will be able to detect if you have a fever, should the feature pass final testing, Bloomberg’s Mark Gurman said in the latest edition of his newsletter.

Fever detection is also expected to be a feature on a new “rugged” version of the Apple Watch Series 8, which is rumored to feature a strong metal casing, a larger and more shatter-resistant screen, and a larger battery.

Back in March, analyst Ming-Chi Kuo claimed that only iPhone 14 Pro models would be upgraded with Apple’s latest A16 chip this year, with the standard iPhone 14 models sticking to the A15 chip.

It was unclear whether this would be a one-off change due to the ongoing chip shortage, but Kuo has now claimed that the trend of only the Pro models getting Apple’s latest chip will continue with the iPhone 15 series and beyond.

So if you want to have top stories like the above recap delivered to your email inbox each week, subscribe to our newsletter!Tag: Top Stories
This article, “Top Stories: M2 MacBook Air Orders, iOS 16 Beta 3, and More” first appeared on MacRumors.com