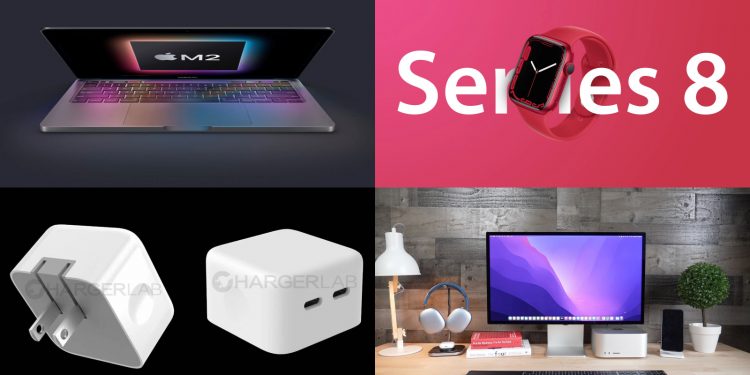 We’re less than two months out from WWDC, and Apple-related rumors are surfacing with increasing frequency. The latest batch includes an overview of upcoming Macs based on the next-generation M2 chip family, plans for the Apple Watch Series 8 and future models, what might be Apple’s first USB charger with multiple ports, and a few software details about iOS 16.

Other news this week included an Apple goof that saw users temporarily unable to update the firmware on their Studio Displays, lots of discussion about Meta’s plan to take nearly 50% commissions on virtual goods in the metaverse even as it argues against Apple’s App Store commissions, and more, so read on for all of the details!

Apple is internally testing several variants of the next-generation M2 chip and the updated Macs that will be equipped with them, reports Bloomberg, citing developer logs. There are “at least” nine new Macs in development that use four different M2 chips that are successors to the current M1 chips.

The machines include M2-based MacBook Air, 13-inch MacBook Pro, and Mac mini models, while more powerful 14-inch and 16-inch MacBook Pro models and a new Mac Pro will use M2 variants such as the M2 Pro and M2 Max and a successor to the M1 Ultra currently found in the high-end Mac Studio.

We’re expecting to see as many as three new Apple Watch models later this year, and while it looks like we may be getting some new health-related features such as a body temperature sensor on the most advanced models, a couple of long-rumored sensors for blood pressure and blood sugar don’t appear to be ready for prime time yet.

Some of those features will be integrated with new health-related enhancements in iOS 16, which we’re also starting to hear a bit about. It sounds like we won’t be getting a significant redesign, but there will be some tweaks to notifications and other aspects.

Following last week’s discovery of a premature mention of an upcoming 35W dual USB-C charger from Apple, we’ve now seen some alleged leaked images of the U.S. version of the device, which includes foldable prongs and ports on the side of the charger.

There’s been a bit of confusion as similar chargers from Mophie and white-label knockoff accessory makers are also surfacing, but it looks like Apple will also be getting into the game.

Over the weekend, users of Apple’s new Studio Display found themselves unable to update the firmware of the device due to an apparent oversight by Apple which left the latest version unsigned by Apple for several days.

When Apple stopped signing iOS 15.4 earlier this month to help keep users on the latest iOS 15.4.1 update, it appears the company forgot there was no 15.4.1 update available for the Studio Display, leaving no current version authorized by Apple for installation. The issue was resolved by Apple on Monday, and users are once again able to update their displays.

While Meta, better known as Facebook, and founder Mark Zuckerberg have repeatedly slammed Apple’s 15–30% commissions on App Store in-app purchases, Meta has revealed that it will be taking a nearly 50% commission on digital assets in its “metaverse.”

The revelation immediately sparked comments about Meta’s hypocritical stance on commissions, and Apple wasn’t shy about weighing in, saying that it “goes to show that while they seek to use Apple’s platform for free, they happily take from the creators and small businesses that use their own.”

So if you want to have top stories like the above recap delivered to your email inbox each week, subscribe to our newsletter!Tag: Top Stories
This article, “Top Stories: Apple Watch, iOS 16, Mac, and Dual USB-C Charger Rumors” first appeared on MacRumors.com