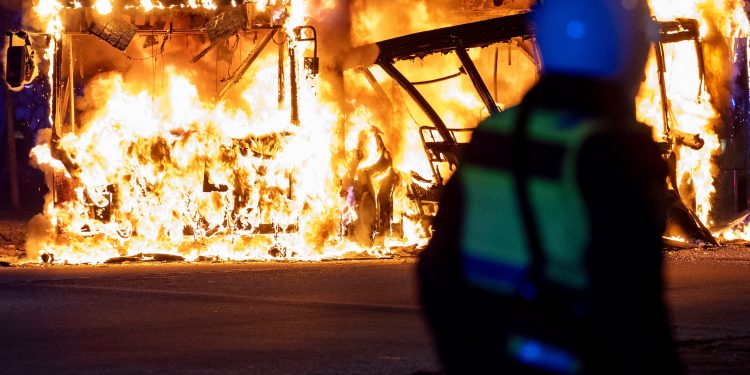 An anti-riot police officer stands next to a city bus burning in Malmo late April 16, 2022. – The unrest in Malmo has continued after Rasmus Paludan, party leader of the Danish right-wing extremist party Tight Course, held a demonstration on April 16, 2022 at Skanegarden near the Oresund Bridge.

A demonstration planned by Stram Kurs, a Danish far-right party, which threatened to burn the Quran, had to be moved to the Swedish city of Malmo after protesters threw stones and set tires and cars on fire, AP reports.

Announcing the move, Stram Kurs’ party leader Rasmus Paludan wrote on Facebook that it was “time to burn the Quran” and that they would bring “pork blood” to pour over the holy text.

Paludan, a 40-year-old Danish lawyer with Swedish citizenship, set up Stram Kurs, or Hard Line, in 2017 with an anti-immigrant and anti-Muslim agenda and advocates banning Islam and the mass deportation of “non-Western” people.

One protester drove a car at riot police. The driver was arrested and is being investigated for attempted murder, Swedish news outlet Svenska Dagbladet said.

Early on Saturday, Kim Hild, spokeswoman for police in southern Sweden, said the threshold for denying free speech was high, and permission would not be withdrawn for the anti-Muslim demonstrations, AP reports.

Protests have been held across the country since Thursday, including in the capital city of Stockholm and other towns where Srtam Kurs planned to hold rallies, Swedish news reports.

On Thursday, police equipment was stolen, and Friday saw at least ten police officers injured in the violence.