The White House was caught off guard by the timing of the Supreme Court’s decision that overturned Roe v. Wade, report says 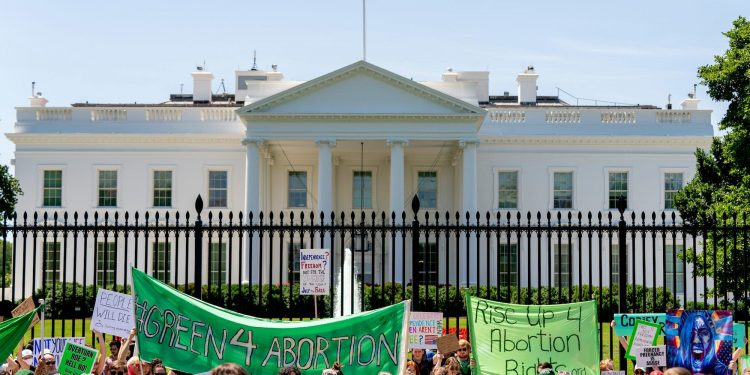 The White House was caught off guard when the Supreme Court released its decision overturning Roe v. Wade and its protections for abortion access on June 24, CNN reports.

White House counsel Dana Remus had told fellow senior colleagues that she didn’t expect the court to release its decision in the case, Dobbs v. Jackson, on June 24 — the day their opinion overturning Roe did, indeed, come out, CNN reported.

And the press office official designated as the point person for abortion was away from their desk getting coffee when the decision, in which the court upheld Mississippi’s 15-week abortion ban and ended 50 years of federal protections for abortion access in the US, was released, CNN said.

Democratic lawmakers, activists, and other stakeholders are increasingly frustrated and exasperated with what they see as insufficient preparation for the decision, which was leaked and published by Politico over seven weeks earlier, and a lack of urgency and outrage on the part of the White House, CNN reported.

CNN also reported that members of “Democratic leadership” made fun of Biden’s remarks that day from a foyer in the White House.

One member of Congress, speaking on the condition of anonymity, described the Biden White House’s responses to abortion and other issues as “rudderless, aimless and hopeless” to CNN.

“There’s no fight,” another Democratic member of Congress told the outlet. “People understand that a lot of this is out of his hands — but what you want to see is the President out there swinging.”

In an interview with CNN’s Dana Bush, for example, Vice President Kamala Harris said the White House was “not currently discussing” the idea of putting abortion and services on federal lands, as some progressive lawmakers had suggested, and immediately pivoted to encouraging Democrats to vote in the 2022 midterm elections.

A White House official later told Insider that while the idea was “well-intentioned,” it could expose abortion providers and patients to prosecution in states that have banned or heavily restricted the procedure.

A July 1 White House strategy call on abortion access with Democratic governors also came together so quickly at the last minute that no governors could meet in person and several couldn’t adjust their schedules in time, CNN reported.

It’s not just elected officials who are displeased.

“Will & Grace” actress Debra Messing’s frustrations with the White House spilled out into the open on a “fatalistic” White House call with celebrity surrogates, CNN reported, with Messing questioning why she was being asked to help, “yelling” about the utility of voting, and others on the call also wondering what the point of it all was.

White House aides, for their part, told CNN that Biden is taking a measured and “realistic” approach to challenges like abortion where the administration has few tools at its disposal.

“He’s being realistic, they believe, and responsible — not just because his options are truly limited, but specifically because he’s trying to restore the structural integrity of the government and of democracy after four years of Trump,” CNN wrote.