The Supreme Court just made it harder to combat the climate crisis. Top tech firms say that’s bad for business and the planet. 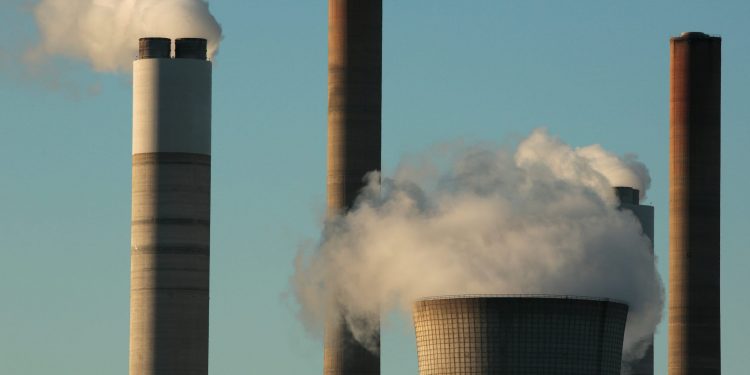 A coal-fired electricity plant in Juliette, Georgia. A Supreme Court ruling this week makes it harder for the government to regulate emissions.

The Supreme Court ruling on Thursday limiting the Environmental Protection Agency’s authority to regulate plant-warming pollution from power plants may undercut climate goals set by Alphabet, Amazon, Microsoft, and other companies and put their operations at greater risk.

The tech giants told the high court earlier this year that scaling up renewable energy was a central part of their plans to combat the climate crisis, and that corporate action alone wouldn’t reduce greenhouse-gas emissions enough to prevent the most catastrophic effects of the crisis that can harm workers and supply chains.

“Stable, nationwide regulations will spur additional innovation and investment in clean energy and related technologies, which is a predicate for achieving the emissions reductions needed to address climate change,” attorneys for a group of 15 companies wrote in a “friend of the court” brief, adding that a billion kilowatt hours of clean energy was still needed for the companies to meet their combined goals.

Alphabet’s Google promised that carbon-free energy would power its campuses and data centers around the clock by 2030. Microsoft and Amazon want to shift to 100% renewable energy by 2025 as part of broader climate plans.

While the Supreme Court’s decision didn’t eliminate the EPA’s power to regulate emissions from power plants, the agency would no longer be able to set statewide emissions limits on the industry to force a transition to renewable energy.

Instead, the EPA can target individual power plants — a less efficient strategy and a major setback to President Joe Biden’s goal to cut US emissions in half by the end of the decade and establish a carbon-free power industry by 2035. To meet that target, the US has to slash emissions from the sector, which is the second-largest source of pollution behind transportation and which accounts for a quarter of US emissions.

The Edison Electric Institute represents investor-owned utilities that would have been regulated under the Obama administration’s Clean Power Plan that spurred the Supreme Court case. The group said its members have already achieved more emissions reductions — a 36% cut compared with 2005 levels — than the Obama-era rule would have required, in part by replacing dirtier coal with natural gas. Still, fossil fuels account for about 60% of US electricity production, the Energy Information Agency said.

The Edison Electric Institute filed a brief in support of the EPA’s authority, arguing in part that individual power plants would face a litany of lawsuits if the agency didn’t regulate emissions. Emily Fisher, EEI’s general counsel and senior vice president of clean energy, told Insider in a written statement that the group was still evaluating the effects of the Supreme Court decision, and that utilities were committed to working with Michael Regan, the EPA’s administrator, on a new regulation.

The longer the US takes to curb emissions, the greater the climate risks for companies and workers. The world is already experiencing more extreme weather that damages infrastructure and displaces communities, including heat waves, wildfires, and hurricanes. And the tech firms also said that tackling climate change was key to keeping investors and customers happy.

Scientists warn the effects will be catastrophic if the world warms more than 1.5 degrees Celsius above preindustrial levels, a threshold global leaders are trying not to cross under the terms of the Paris climate accord. Current policies put temperatures on track to rise as much as 2.7 degrees by 2050.

That would slash global economic output by between 11% and 14% by 2050, or $23 trillion annually, said a report from the insurance firm Swiss Re. The decrease would only be about 4% if countries were to meet the goals of the Paris accord.

Andrew Behar, the CEO of the investor advocacy group As You Sow, said the Supreme Court decision flew in the face of corporate demand and would leave the US economy behind those of Europe, China, and other regions and nations driving low-carbon-technology innovation.

“Investors with trillions of assets under management are moving to decarbonize their portfolios to achieve net-zero emissions and thousands of the world’s largest companies, many in the S&P 500, are setting targets for their operations and value chains to draw down their emissions to net zero,” he said, referring to the Standard & Poor’s 500 stock index comprising large US companies. “But an even playing field and clear regulatory guidelines from EPA are necessary to drive progress across the economy.”