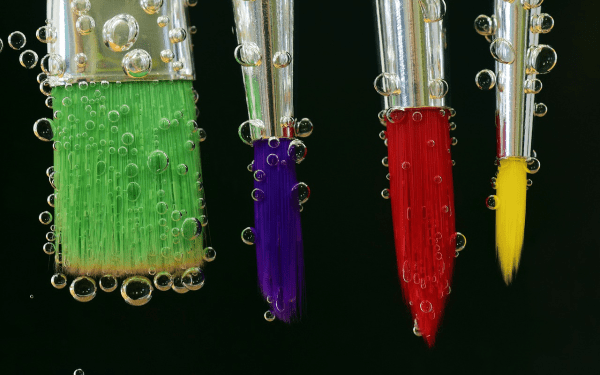 Creative thinking does not require being right all the time. Only the end result must be right. Thinking laterally means stepping off the beaten path into the fog and searching through it at random until a natural path is found. The need to be right every step of the way is one of the greatest obstacles to new ideas.

This is a phrase of Edward de Bono, the British psychologist and writer. He invented and developed a technique called “the random word,” which helps wherever you need to think hard — in business, too. We tell you more about it by finding a description in the book “BRRR-R-R!!!-effect.

of adding (transferring) traits of randomly chosen objects to the object under improvement, to our system. This is done for the sake of disabling logic and critical thinking, which automatically – subconsciously – cuts off solutions that seem “pointless.

Let’s choose an object: the submarine. And random objects: erosion, kangaroo, compass. Combine their properties with the submarine. Compass property – the arrow always points north. Transfer: the submarine is only able to move along magnetic lines and along deep currents. Engineless movement underwater is slow, but cheap: in the future such peculiar underwater “sailing ships” can be used for cargo transportation or tourism.

Kangaroos move by leaps and bounds, leaning on the tail. Let the submarine gallop! The port is located at the bottom. The boat makes the leap by bouncing off the bottom – to the next port.

Erosion is the process of destroying the soil. Let the submarine destroy water in the same way while moving: turn it into steam, as in G. Adamov’s The Mystery of the Two Oceans, or decompose complexes of molecules into component parts, as in V. Zhuravleva’s story The Snow Bridge Over the Abyss.

The result: a submarine that starts moving, pushing off the bottom like a kangaroo to gain initial speed. In doing so, it enters an underwater current, where it unfolds its “sail” and floats, decomposing the water in front of it to reduce drag.

How do I solve my problem?

Write ten random word-objects that first come to mind (for example: cat; coca-cola; rush; birch; love; stairs)-preferably as far removed as possible from the essence of the situation you’re working with. And include a brain-exploding questionnaire:

How would you solve a problem with… the cat? How would a… ladder solve the problem? Could a birch tree

What if you added haste as a requirement to your process? What if you performed the required operations with love

? Whoa, whoa, whoa. The question immediately arises: well, how do you apply birch to the task of, say, improving the customer experience in a coffee shop?

Often the “random word or object” method is not directly applicable. In this situation, the “morphological box” or method of focal objects helps: you don’t use the birch (the cat, love) itself, but the properties associated with them: the birch is spotted, weeping, growing in a grove; the cat is furry, soft, independent, clawed. These properties-the spotted birches, the fluffy cats-also become an arsenal. Apply them to your problem, and the solutions, while still strange and raw, will slowly begin to make their way into the zone of the conscious.

What if you solve the problem step by step, walking like a ladder? Or build a ladder of goals for employees?

What if you give the employees involved in the process some aspect of the “sweet life” (sweet as Coca-Cola)?

How about making the unit extremely independent (like cats) – and let them come up with results when they see fit?

Capture the ideas you come up with, regardless of how crude, unprocessed or strange they may be. Gradually you will see that random words open up a whole new cluster of solutions. This is what we provoked the brain for.

But don’t fall into the trap!

Random throw-ins have to be really spontaneous. Our brain reacts rapidly and can unnoticed pick out the most “convenient” (and therefore not provocative enough) random words and objects for us. And the power of the method will diminish dramatically.