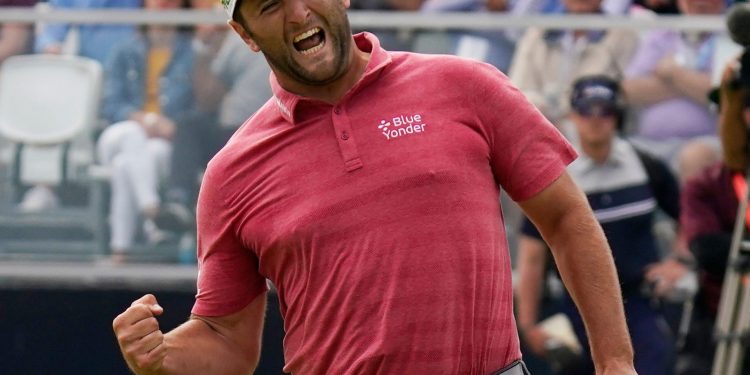 Jon Rahm celebrates on his way to winning the 2021 US Open.

The PGA Tour’s 2022 US Open Golf Championship is broadcasting live from The Country Club in Brookline Massachusetts. The broadcast is spread between NBC, USA, and Peacock; USOpen.com and the US Open app are also streaming featured groups and featured holes throughout the major.

The US Open is the third of four majors on the PGA Tour’s annual calendar. Scott Scheffler won The Masters in April, while Justin Thomas won the PGA Championship in May. Jon Rahm became the first Spanish golfer to win the US Open last year at Torrey Pines in California.

Tiger Woods will miss the US Open this year as he continues to recover from a car crash that left his legs seriously injured. Woods made the cut at The Masters and the PGA Championship but struggled in the later rounds of both tournaments.

The PGA Tour recently suspended 17 players from competition for playing in the LIV Golf tour, including Phil Mickelson and Dustin Johnson, but  some of those players are able to participate in the US Open because it’s managed by a separate governing body. LIV has drawn scrutiny for its ties to Saudi Arabian investors.

How to watch the US Open golf championship

You can watch the US Open golf championship on NBC, USA, and Peacock. Select coverage is also available to stream through the US Open website and app. The schedule below will let you know what time the broadcast moves between channels and services.

If you don’t have cable, the cheapest way to stream NBC and USA is to sign up for the Sling TV Blue plan for $35 a month. New members can get their first month for $10 off.

Meanwhile, Peacock Premium costs $5 a month for ad-supported streaming access to the service’s entire library. Peacock also has a free plan but it doesn’t support live sports. An ad-free Peacock Premium Plus option is also available for $10 a month, but live programs still feature commercials.

The Peacock app is available on most streaming devices, including Apple, Android, Roku, Fire TV, LG, Samsung, Xbox, and PlayStation.

The US Open golf tournament runs from June 16 to 19. Below, is a full breakdown of the schedule with details on where you can watch each round.