The Most Valuable Form Of Money Nobody’s Seen…Yet 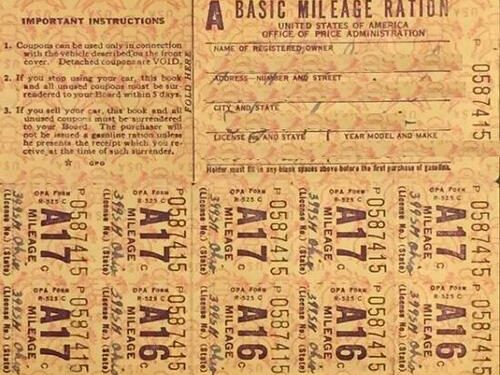 The Most Valuable Form Of Money Nobody’s Seen…Yet

What is “money”? “Money” is a claim on the essentials of life. Ration cards are claims on essentials.

Many people expect “money” will soon be tied to commodities. Agreed. It’s called a ration card that grants the holder the right to buy a specific quantity of essential goods at a specified price.

This right is a form of “money” directly tied to the value of commodities.

Ration cards are the only fair way to distribute essentials in times of chronic scarcity. Markets work fine when there’s a substitute for whatever is scarce, but there are no substitutes for electricity, food, fuel or fresh water, the FEW essentials (Food, energy, water).

Leaving the distribution of scarce, no-substitutes essentials up to the market leads to the rich eating very well indeed and the poor going hungry. This leads to a little thing called the overthrow of the failed status quo and the destruction of a good chunk of its ruling class (Payback’s a witch, etc.). No bread? Let them eat iPhones.

We know ration cards work because a mass experiment in rationing essentials was conducted in World War II. Maybe fairness no longer matters (and if it doesn’t, then prepare for the overthrow of the failed status quo and the destruction of a good chunk of its ruling class), but if fairness matters–or the ruling elite wish to keep all their power and all their goodies–then rationing and the ruthless suppression of price gouging are as good as gold.

What is “money”? “Money” is a claim on the essentials of life. Ration cards are claims on essentials, enforced by the state to insure everyone has a minimum of the FEW resources. Beyond that minimum, the market will discover the price of extra goodies. But the point is that ration cards are a fair form of “money.”

With a little digital magic, ration cards can’t be counterfeited or used by anyone but the person to whom they were issued. If you get your ration and don’t need all of it, nobody’s stopping you from selling it to somebody else. But at least everyone got the same amount at the same price.

How valuable is ration-card “money”? Let’s put it this way: if you’re a wealthy, powerful member of the ruling elite, how much would you pay to avoid the overthrow of your regime? If creating ration-card “money” saves your bacon, then what other form of “money” has more value than that?

The other form of “money” that will be valuable isn’t even tangible. It’s called self-reliance. More on that later.

My new book is now available at a 10% discount this month: When You Can’t Go On: Burnout, Reckoning and Renewal. If you found value in this content, please join me in seeking solutions by becoming a $1/month patron of my work via patreon.com.