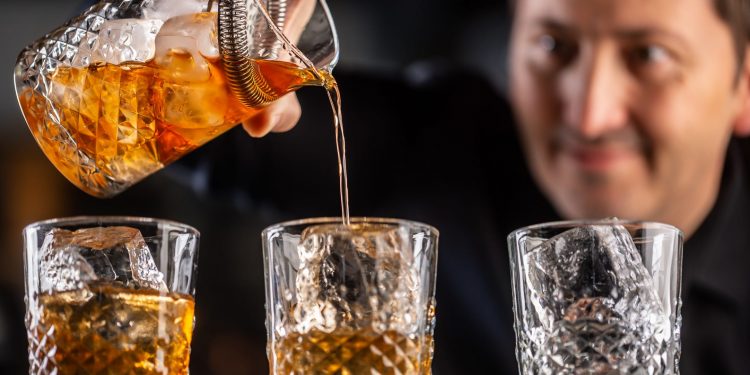 So-called “luxury bourbon” is a hot trend in the American whiskey market and scammers are cashing in by selling bottles of premium brands refilled with cheap substitutes for thousands of dollars, according to a report by The New York Times this week.

Counterfeiters are taking advantage of the boom in domestic sales of super-premium American whiskey, or bottles valued at more than $50. Demand is well-outstripping supply at the very high end of the market where bottles sell for at least $500 and the demand has created a thriving secondary market.

The secondary market is showing up mostly within private social-media groups. Sales or trading in such groups is illegal although Kentucky and New York and some other places are loosening laws to allow private collectors to sell through an auction or to licensed retailers, the Times said.

The report noted that sales of super-premium American whiskey nearly doubled to 4 million cases from 2016 to 2020, compared with an average growth of 30% for all American whiskeys, citing figures from the Distilled Spirits Council of the United States.

The newspaper opened its report with an example highlighted by “Inside Edition” TV last May in which an unidentified program producer was told by a Manhattan wine shop that a bottle of bourbon it was selling for about $1,000 was authentic. The Col. E.H. Taylor Four Grain bourbon was without the usual packaging of a special cardboard tube, and a strip stamp attached over the top of the cork was on backwards.

The news producer took the purchased whiskey to Buffalo Trace, a Kentucky distillery that makes the Col. E.H. Taylor line of bourbon, for chemical analysis. The result: the bottle was refilled with cheap whiskey, resealed, then sold to the wine shop as part of a private collection.

The New York Times reported that the wine shop said it had already pulled several bottles from the collection from its shelf and that it had offered refunds on bottles it had already sold.

Buffalo Trace also makes Pappy Van Winkle, a brand that can command more than $5,000 on the secondary market, and demand has been picking up for bourbons made by other distilleries including alcohol-industry heavyweight Brown-Forman.

​​Both the Times and “Inside Edition” spoke with Adam Herz, a writer and producer in Hollywood best known for creating the “American Pie” franchise. The whiskey collector is an expert in counterfeit bottles, telling the Times his interest was piqued when he spotted brisk online sales of empty bottles of high-end whiskey.

“$380 for a single bottle. Why? Because that bottle can be refilled and sold for way over $2,000,” Herz told “Inside Edition,” and estimated sales in the thousands of bottles of phony whiskey. “I’ve seen suburban dads counterfeiting just for an extra buck,” he said.

The Times said most distilleries are only slowly taking action on this matter and few are willing to admit the problem publicly as they fear encouraging counterfeiters and discouraging interest in their legitimate products. Many distilleries continue to package bottles with common shrink-wrap seals that can be easily faked.