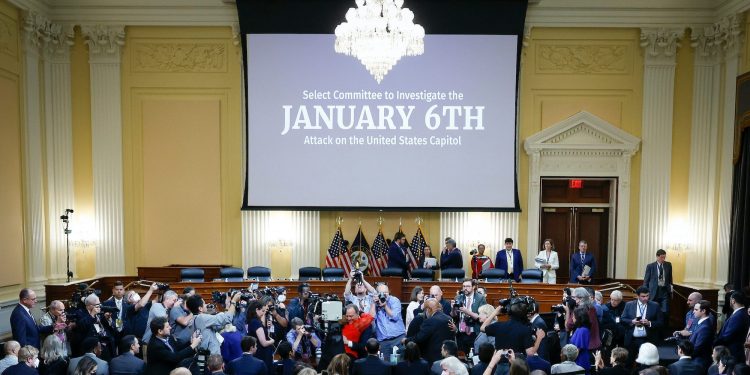 The House select committee investigating January 6 showcased in bracing detail how President Donald Trump and his allies pressured Republicans to overturn the election, leading to threats against both high-profile officials and regular workers.

It also featured the testimony of Wandrea “Shaye” Moss, a rank-and-file local election worker from Fulton County whose life was upended by Trump’s allies making her the center of their false accusations that the 2020 election in Georgia was rigged.

“The point is this, Donald Trump did not care about the threats of violence,” Rep. Liz Cheney said at the beginning of the hearing. “He did not condemn them, he made no effort to stop them.”

On Tuesday, Trump preemptively sought to discredit Bowers before his testimony in a statement attacking Bowers as a “RINO” and said Bowers told him the 2020 election was rigged.

But in powerful testimony, Bowers firmly rebuked Trump’s claims and described how he stood up to an intense pressure campaign.

“Anywhere, anyone anytime has said that I said the election was rigged..that would not be true,” Bowers testified.

Bowers also detailed how Giuliani pressured him to hold hearings investigating the 2020 election, but failed to present any evidence that the election in Arizona was tainted by massive fraud or rigged.

“I refused,” Bowers said. “At that time, the circus had been brewing with lots of demonstrations both at the counting center, at the Capitol, and other places. And I didn’t want to have that in the House.”

Bowers later said that Giuliani told him, “We have lots of theories, we just don’t have the evidence.”

John Eastman, Trump’s legal adviser, also pressured Bowers to go along with a plot to invalidate Arizona’s election results, saying, “just do it and let the courts sort it out.”

The January 6 Committee displayed texts between an aide to Sen. Ron Johnson and an aide to Vice President Mike Pence

An outlandish plot to send Trump fake electors to Washington.

The hearing also revealed new information about the scheme spearheaded by Giuliani and Eastman to assemble slates of unofficial Trump electors in states that voted for Biden.

“Essentially, he turned the call over to Mr. Eastman, who then proceeded to talk about the importance of the RNC helping the campaign gather these contingent electors in case any of the legal challenges that were ongoing changed the result,” RNC Chairwoman Ronna McDaniel recalled in her deposition.

The phony electors were not certified by government authority and had no legal weight or authority whatsoever. And several current and former Trump aides testified that the bulk of the White House’s counsel’s office thought the plan was unlawful.

“We were just kind of useful idiots or rubes at that point,” said former Trump staffer Robert Sinners in a deposition. “I’m angry, because I think in a sense no one really cared if people were potentially putting themselves in jeopardy.”

In Michigan, the unofficial slate of Trump electors even tried to hid in the state capitol overnight to meet and cast their votes.

The hearing also documented the disorganized scramble to get the slates of electors to Pence.

“Freaking trump idiots want someone to fly original elector papers to the senate President,” Mark Jefferson, the executive director of the Wisconsin Republican Party, wrote in a Jan 4, 2021, text message. “They’re gonna call one of us to tell us just what the hell is going on.”

An aide to Sen. Ron Johnson of Wisconsin, one of the senators who objected to the election results, texted Vice President Mike Pence’s legislative director the morning of January 6 attempting to arrange a handoff of an “alternate slate of electors for MI and WI.”

“Do not give that to him,” the Pence aide, Chris Hodgson, replied.

Raffensperger said that he looked into Trump’s claims that there were missing ballots in the Georgia vote count and found no evidence to support them.

“The numbers are the numbers and the numbers don’t lie,” he told the House select committee.”We had many allegations and we investigated every single one of them.”

Trump went as far as to make acting US Attorney of Northern District of Georgia Bobby Christie investigate this matter. Christie later told the Atlanta Journal-Constitution that he found no evidence of voter fraud and dismissed the case, Raffensperger said.

The committee played recordings of Raffensperger’s calls with Trump where the former president pressured him to investigate election fraud. When Raffensperger pushed back and said there was no evidence, Trump then responded, “there’s either two answers, dishonesty or incompetence.”

Raffensperger testified about how he and his family members were harassed by pro-Trump supporters, saying that people broke into his daughter-in-law’s home and sent his wife threatening text messages.

“I think sometimes, moments require you to stand up and just take the shots by doing your job. That’s all we did,” he said.

Wandrea “Shaye” Moss, a former Georgia election worker, is comforted by her mother Ruby Freeman, right, as the House select committee investigating the Jan. 6 attack on the U.S. Capitol continues to reveal its findings of a year-long investigation

A mother and daughter election worker duo speak out.

Wandrea “Shaye” Moss, a rank-and-file local election worker from Fulton County recalled, in harrowing detail, receiving threatening messages against her and her mother in the aftermath of the Georgia vote count.

Moss and mother Ruby Freeman, who worked as a temporary election worker in 2020, became the targets of a baseless conspiracy pushed by Trump and Giuliani claiming that election workers counting ballots at State Farm Arena in Atlanta committed fraud.

“I’ve lost my name and I lost my reputation. I’ve lost my sense of security. All because a group of people starting with number 45 and his allies, Rudy Giuliani, decided to scapegoat me and my daughter Shaye,” Freeman said.

Moss said she no longer works in elections.

“I don’t go to the grocery store at all. I haven’t been anywhere at all. I gained about 60 pounds. Just don’t do nothing anymore,” Moss said. “I second-guess everything that I do. It’s affected my life in a major way, every way. All because of lies.”

Freeman testified that as January 6, 2021, neared, she left her home for two months on the advice of the FBI.

“I felt horrible,” she said. “I felt homeless. I can’t believe this person has caused this much damage to me and my family to have to leave my home.”

Moss said a lot of the messages she received were “racist” and “painful.” Her grandmother was also subjected to harassment. Moss recalled her grandmother calling her and telling her that people tried to push their way into her home and make a “citizen’s arrest.”

“This woman is my everything I’ve never even heard her or seen her cry ever in my life and she called me screaming at the top of her lungs. She was just screaming, I didn’t know what to do. I wasn’t there. I just felt so helpless and so horrible,” Moss said.