The J6 committee has kept DOJ in the dark since April about 1,000 witness interviews, feds say 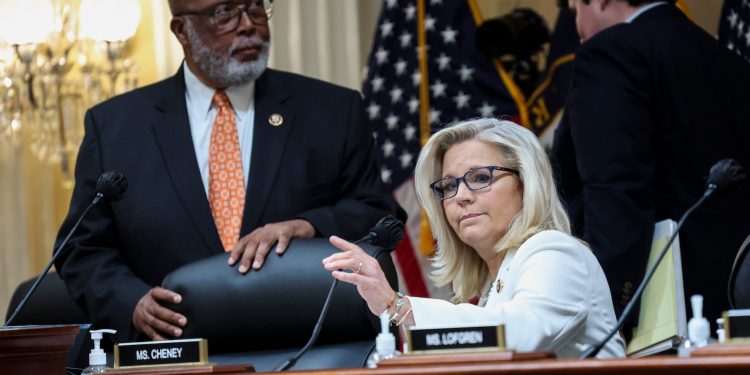 Rep. Liz Cheney (R-WY) (R), Vice Chair of the House Select Committee to Investigate the January 6th Attack on the U.S. Capitol, and Committee Chairman Rep. Bennie Thomson (R-MS) take their seats during the fifth hearing on the January 6th investigation in the Cannon House Office Building on June 23, 2022 in Washington, DC.

The January 6 committee has left the Department of Justice in the dark for two months over when — and whether — it will give the government an early look at transcripts for 1,000 witness interviews, it was revealed Friday.

The committee’s silent tight-fistedness over the massive trove of evidence was revealed by federal prosecutors during a pre-trial hearing in the Oath Keepers seditious conspiracy case.

The government warned the committee in a letter last week that its failure to turn the transcripts over is hurting its criminal investigations.

But on Friday, prosecutor Kathryn Rakoczy revealed that the DOJ has been asking the committee to share its transcripts for a full two months, to no avail.

“As we have previously shared with counsel in this case, the government — the Department of Justice — submitted letters on April 20th of this year and June 15th of this year, requesting access to the transcripts of interviews that have been conducted by the committee,” Rakoczy told DC District Court Judge Amit P. Mehta.

“If and when we receive access to any transcripts we will provide those immediately to counsel,” she added.

“We do not have any anticipated timeline for when and if we will get access to these beyond what has been publically reported — that the transcripts will be publically released sometime in the fall. That is what public reporting has been.”

The committee has said only that it will be making the transcripts available — to the public — in early September.

That means the massive evidence dump could happen mere days before a pool of 150 prospective jurors in the Oath Keepers case will be getting their juror questionnaires.

“We are hopeful that there will not be information in the transcripts that would necessitate a continuance of the trial,” Rakoczy said.

“It is the hope of I think all counsel that we are able to maintain our September 26 trial date,” she added.

Also on Friday, the judge responded to a request by prosecutors for an ethics inquiry into whether defendants in the case — including Oath Keepers leader Stewart Rhodes — are being paid by Defending the Republic, which is controlled by Trump lawyer Sidney Powell.

Lawyers for Rhodes and other defendants in the case on Friday complained that the government filed the request publicly, and said that their clients did not feel there was a conflict of interest in the shared defense funding source.

The judge told the defense lawyers to submit their fee agreements directly to chambers if they are receiving funds from the group. The judge said he would then set individual times to ask defendants privately whether they were aware of, and waived, any potential conflict of interest.

The case has its next pretrial hearing on August 2.