The Dow Jones has cooled off amid Intel’s troubles. Oil goes to $122 and prepares to bill oil bears 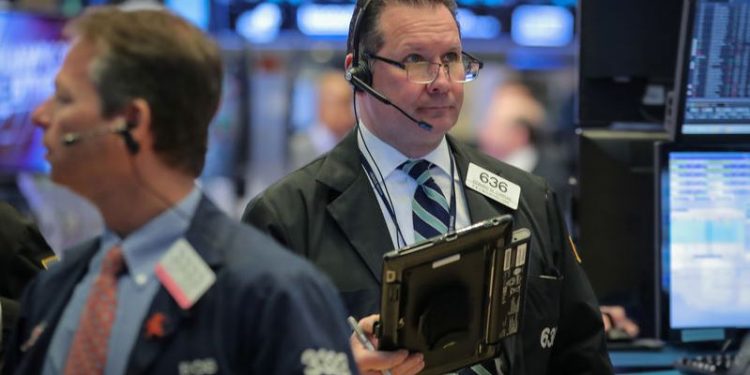 US stock market couldn’t keep positive mood, which was outlined at the beginning of the week. On the background of the next corporate outlooks on Intel in America and Credit Suisse in Europe the main indexes moved into the negative zone. Dow Jones lost 0.81%. The S&P 500 broad market index and the Nasdaq technology stock barometer fell 1.08% and 0.73%, respectively.

Intel (INTC) stock was the worst performing stock in the Dow Jones Industrial, losing nearly 5.3% amid a Citibank research note based on the results of the semiconductor industry conference the day before

A trader at NYSE with experience recalls former days of Intel with nostalgia. Photo: CNBC

The cautious tone of Intel’s financial director’s speech at the conference allowed Citi analysts not only to conclude that the current quarter is proving more difficult than expected, but also to reduce revenue and profit forecasts for the American chipmaker both for the second quarter and for the current year

Most of Intel’s business is related to chips for personal computers, whose sales declined first amid a breakdown in supply chains during the pandemic, and then the inflationary risks raising prices for end products

The king is long naked

fact that Intel has long lost its leadership lost to Taiwan Semiconductor Manufacturing (TSM), and the guys at Advanced Micro Devices (AMD)

continue to saw off its remaining market share, one analyst note on the once industry leader and uncompromising industry authority has managed to affect not only the stocks of relevant companies in the sector, but also the indices as a whole, writes Motley Fool.

If you look at the longer interval of the stock chart, it becomes even a little sad. Since the beginning of the year the securities of the former king of the technology sector lost more than 22%, and over the last 5 years INTC symbolically added 15% and is literally one step away from negative territory. To make it clear – the shares of their main competitor Advanced Micro Devices (AMD) lost 32% this year, but over the last five years they “bombed” up almost 730%

Novavax made it to the elite

Novavax stock, about which we’ve written enough in previous reviews, didn’t quite rise as expected. The stock added only 4.48%, though expectations for yesterday’s extra time were significantly higher – over 20%. I continue to be positive on having NVAX in my investment portfolio from these levels, with one “but”. This is not 2020, or even 2021.

There will no longer be one-day spikes or weekly hikes of tens or even hundreds of percent on such FDA approvals in stocks as there were in the days of acute shortages of such drugs. But the fact that the Maryland biotech got the green light from the regulator is obviously positive news, which gives a chance for Novavax to be in the elite of the industry, though conditionally in last place, with all the ensuing expectations for the securities.

Is oil starting the great trek to the North?

Oil prices have moved from $120 after all. Futures contracts for West Texas WTI reached $122 and North Sea Brent $123 per barrel, amid the onset of the active phase of the automotive season in the U.S. and the lifting of coronavirus travel restrictions in the Middle Kingdom. At the same time, the UAE Energy Minister made a preemptive notice to those who have not understood anything yet – at current consumption volumes the world is far from its peak, as China has not even returned to the market yet.

On topic: The West’s energy defeat: Why oil prices will reach $150 a barrel sooner than they will be $75

The risk of a drop in supply remains open due to the geopolitical confrontation between the United States and Russia. OPEC has recently promised to increase oil production, but the announced volume of extra 648 thousand barrels per day is obviously below the “parity” of supply and demand, which will affect the price of black gold. The stumbling block is the position of the European Union, which in favor of the Americans stamps another package of autodafes that maintains constant tension in the energy market.

When I was watching oil prices yesterday, I thought that in my review I would colorfully describe another positive thing in the oil companies’ stocks. But the market once again reminded me that emotions have no place here. Only ExxonMobil and Chevron stocks closed on the plus side at the trading session of June 8. I mean the American representatives of large and medium capitalization. The gain of Phillips 66 (PSX) +0.3% and Hess (HES) +0.43% and oilfield services Halliburton (HAL) +1.03% are not taken into account.

It should be understood that many market participants will use such moments to close long positions. Especially considering the fact that in the current situation it can be done painlessly even on large volumes. Just look at the relatively long timeframes on the charts, and the motive of the profit fixers becomes clear.

For example, the securities of ExxonMobil (XOM), the largest U.S. oil company by capitalization, grew by 64% this year. Growth on securities of U.S. vice-champion Chevron (CVX) exceeded 50%, and ConocoPhillips (COP), the last three, reached 65%. And if we take shares of lower-value companies, we see more impressive numbers.

Therefore, at current oil levels, a moderate consolidation in oil sector stocks is absolutely even with the long strategy for these securities.

Oil stocks remain the investment favorites of my portfolio at the moment. And in the broad market, I expect nothing but a “saw” at best, or a further decline at worst. Let me remind you that right now we are already 14% off the highs in the S&P 500 Index, and 25% off the Nasdaq. The roller coaster ride will continue in the near term.