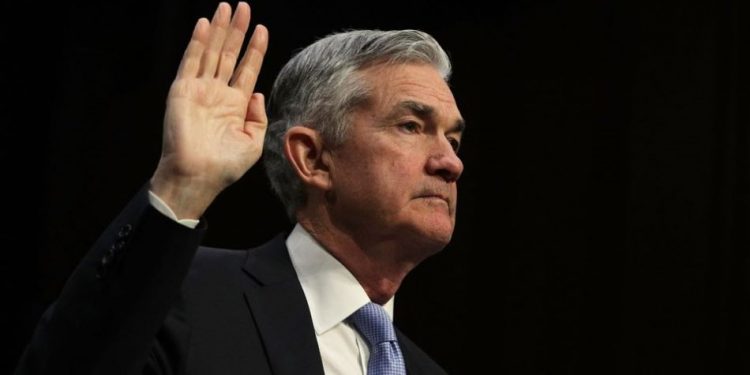 The U.S. stock market, continuing to rethink last week’s inflation statistics, fell heavily on Monday ahead of the Federal Reserve’s meeting on Wednesday.

Dow Jones in anticipation of a 0.75% interest rate

Total sell-off in stocks drove indices to new yearly lows amid an increasing flow of information that the Federal Reserve will consider an immediate 0.75% rate hike Wednesday, higher than previously planned

Fed Chairman Jerome Powell will decide the fate of the markets on June 15. Photo: WSJ

The hawkish sentiment of the regulator may have pushed the index indicators even further away from their highs, which were shown at the beginning of the year. The Dow Jones is already down 17% from its high, and the S&P has officially entered the bear market zone down 21%. At the same time, the Nasdaq has lost a good third (33%) of its weight.

Twenty-nine of the thirty stocks in the Dow closed in negative territory. The leaders of the drop were Boeing (BA) -8.77%, Salesforce (CRM) -6.96% and American Express (AXP) -5.26%. The securities of McDonalds (MCD) managed to add 0.459% to the bearish feast of life and investors’ hope.

The similar situation with the index Nasdaq, where the only stock, which managed to resist the sellers’ pressure, became the biotechnologist Seagen (SGEN) symbolically having added 14 hundredth percent.

Amid the fall of bitcoin, which fell below $22,000 and reached its lowest level since 2020, investors actively sold Coinbase (COIN) and Micro Strategy (MSTR) securities, which lost 11% and 25% respectively during the trading session.

Monday’s collapse occurred after the U.S. stock indices the previous day showed the strongest weekly decline since January amid growing expectations of a recession in the U.S. economy.

Recall that this was contributed by the inflation data released on Friday. The U.S. consumer price index rose 8.6% in May from a year earlier. This is the strongest increase since December 1981.

Despite attempts to “bring down” oil prices in a general wave of sell-off, this was not

WTI futures contracts, which were below $118/bbl yesterday, eventually regained their positions, and closed around $121.

The range of North Sea Brent trading was $119 to $123.5. Nevertheless, it didn’t help oil stocks, but gasoline prices in the US were happy to surpass $5 a gallon.

Despite the dire market conditions in many sectors, investors in energy stocks continue to have decent gains from investing in their assets. By comparison, ExxonMobil shares have gained more than 50% since the beginning of this year, while Occidental is up more than 90%.

Jerome Powell will reassure everyone on Wednesday

Investors will eagerly await the decision Jerome Powell and his team will make public on Wednesday, June 15. According to the previously announced strategy, the Fed should raise rates by 0.5%. But after Friday’s CPI report, the overhang of expectations for a stronger hike (0.75%) will persist.

Based on historical data, the sell-off in the U.S. stock market is likely to continue. According to Bespoke Investment Group, the market has experienced 14 bear markets since World War II. Meanwhile, the S&P 500 broad market index went down an average of 30%, with market declines lasting for 359 days.

In the current situation, consumer discretionary and health care stocks may look better than the market. Gold might also be a safe haven. The quotations of eternal metal though lost on Monday about 2% on the general bearish wave, the further fall, and moreover any significant one, seems unlikely.