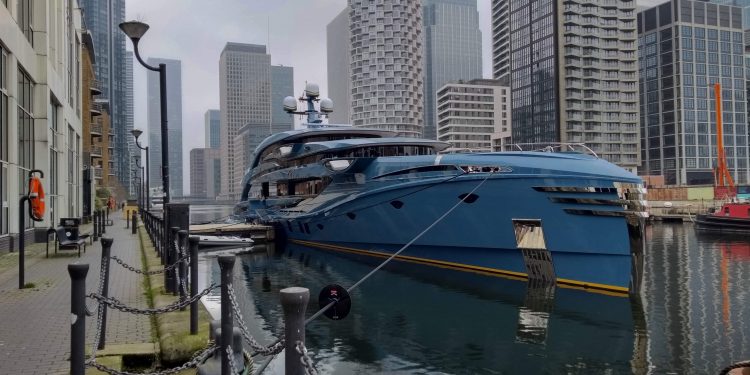 Phi was detained by the UK in London on Tuesday.

The captain of a $50 million superyacht detained by UK authorities says the vessel’s support ship was boarded by authorities in Italy on Thursday.

Guy Booth, the captain of the vessel Phi that was detained in London this week, told Insider that local authorities had boarded Phi’s support vessel, Phi Phantom, in the Italian port of Imperia on Thursday. The 118-foot support vessel has the same owner as Phi, Booth said.

Booth said that two Italian coast guard officers had requested all the vessel’s documents: “Documents were taken away for review, and several hours later, documents were returned to the Captain with a ‘Thanks very much, all appears to be in order’,” he said.

Italian authorities did not immediately respond to Insider’s request for comment about whether coast guard officers reviewed Phi Phantom’s documents or why.

The 192-foot yacht, Phi, was detained by the UK on Tuesday in Canary Wharf, London’s financial hub. The Financial Times reported that the vessel is owned by Vitaly Vasilievich Kochetkov, the founder of Motiv Telecom.

On March 1, the UK banned all Russian-owned or -operated ships from its ports and gave authorities the power to detain Russian vessels. Four weeks later, Phi became the “first ever” superyacht to be detained on UK waters, the National Crime Agency (NCA) said.

Booth had previously said that Phi’s detention was” government overreach and nothing more than a publicity stunt.”

The West has been sanctioning Russian elites and seizing their assets to put pressure on the country to halt its invasion of Ukraine.

Shapps said in mid-March that the UK was investigating “a small number of yachts” with suspected links to Russian oligarchs. On Tuesday, Shapps said that, by detaining Phi, authorities had “turned an icon of Russia’s power and wealth into a clear and stark warning to Putin and his cronies.”

Phi, a 192-foot vessel owned by a Russian businessman, is worth around $50 million.

But the NCA has declined to provide further details on Phi’s owner, merely describing him as a “Russian businessman” and saying that he had “deliberately” kept his ownership of the vessel secret. Kochetkov, who is reported to be the owner, has not been sanctioned by the UK.

“The vessel isn’t seized, merely detained,” an NCA spokesperson told Insider, speaking about Phi. “It remains the property and responsibility of the owner but is effectively prevented from leaving.”

Phi has been moored in Canary Wharf since December after it made its maiden voyage from the Netherlands.