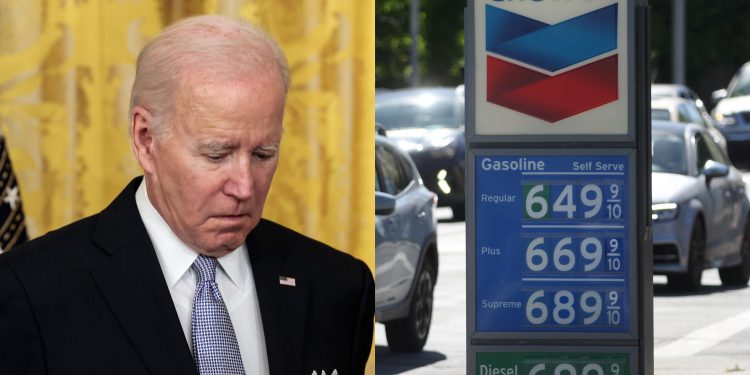 President Biden; gas prices in San Francisco, California on May 20, 2022

With US gas prices hovering around $5 per gallon, Target CEO Brian Cornell says a federal gas tax holiday is the wrong kind of discount.

“It’s only going to fuel the demand,” Cornell told the Economic Club of New York on Tuesday, a day after President Joe Biden floated the idea of suspending the 18.4-cent-per-gallon charge.

“It’s doing nothing to increase supply, so that’s a temporary, almost a mini stimulus,” he added, according to Yahoo News.

US production has been slow to ramp up following the disruption of the Russian invasion of Ukraine, and refiners have been running at capacity trying to meet insatiable demand for not just gasoline, but diesel and jet fuel too.

“It’s time to fundamentally change the supply and demand curves for fuel and transportation,” Cornell said.

The Biden Administration released roughly 50 million barrels of oil from the Strategic Petroleum Reserve and has tried unsuccessfully to cajole producers to increase output, but prices have continued ticking up.

“Increasing demand is not going to help lower those prices over the long term,” Cornell said.