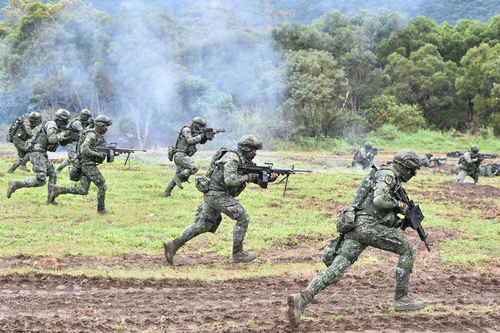 Taiwan’s military took the dramatic step of issuing a public emergency handbook meant to prepare all citizens in the event of a Chinese invasion of the island. The 28-page booklet includes detailed instructions on bomb shelter locations and how to stockpile emergency supplies, as well as basic life-saving steps.

While introducing the handbook in a Tuesday online press conference, defense ministry spokesman Sun Li-fang explained that “the general public can use as an emergency response guideline in a military crisis or natural disaster.”

But of course, the only crisis or disaster looming on people’s minds is the potential for an all-out Chinese PLA military assault – fears that have ratcheted particularly since the Russian invasion of Ukraine, which Beijing has at times appeared to defend, while also refusing to call Putin’s action an “invasion”.

A statement from the specific defense ministry department that authored the booklet, called the “All-Out Defense Mobilization Agency” had this to say: “The guide is for the public to better prepare themselves before a war or disaster happens.”

According to the AFP it’s been inspired of similar guides that the countries of Japan and Sweden have produced for their citizens, and includes info on “where to find bomb shelters via mobile phone apps and what to do in an emergency including how to distinguish air raid sirens.”

Or also there are emergency preparedness instructions which cover events like mass power outages and blackouts, large fires, building collapses, or devastating weather. Taiwan authorities express further, “We hope the public can familiarise themselves where the safety shelters are beforehand.”

Taiwan’s government issued an invasion survival handbook Tuesday, as Russia’s war in Ukraine has raised fears that China may consider similar moves to bring the island into its fold. pic.twitter.com/DOLZURLSPt

While Taipei has lately accused China’s leaders of saber-rattling, also the PLA Air Force continues its weekly aircraft incursions of the islands Air Defense Identification Zone, Beijing has in turn pointed the finger over certain provocations. For example, it was revealed and confirmed last year that there has long been a contingency of US Marines and special forces on the island training Taiwanese forces.

The democratic island has also been hosting more and more US official delegations, and House Speaker Nancy Pelposi was expected earlier this month, but canceled the trip last-minute as she tested positive for Covid-19.